Kirstie Alley drops another bombshell: The 1980s were filled with cocaine binges after her brutal divorce. 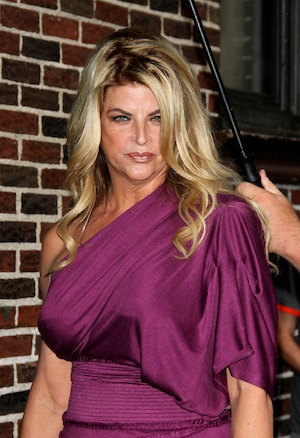 Kirstie Alley is talking to all sorts of press about all sorts of crazy confessions as if this were some kind of atonement. This week, she sat down with Entertainment Tonight and went into great detail about her cocaine binges that would sometimes last for days before she landed her role on Cheers.

She writes in new memoir, The Art of Men, “I did enough cocaine to kill several people.”

Entertainment Tonight was surprised at the candid response Alley gave when asked about The Art of Men‘s cocaine revelations.

“Yeah, I did,” said Kirstie, while nodding emphatically. When asked about her fear of overdosing, Alley explained the thought of death was prominent each time she used.

“I thought I was going to overdose almost every time. But I would do so much at a time. I’d snort the coke and then sit there and take my pulse [thinking], ‘I’m dying, I’m dying.’ “

Alley told Entertainment Tonight that her cocaine use came from shame and depression following her divorce from her first husband. Alley cheated and the marriage dissolved. “And so I kept going for that feeling, that feeling of being extroverted. And so, that would last for 60 seconds and then I was going to die for 30 minutes. And then the second I wasn’t going to die, boom, I’d do it again.”

Kirstie also reveals that the physical consequences of the drug didn’t compare with the emotional and spiritual effects she faced as a result of her cocaine use. “The thing I could feel with me more than my body was dying, was my soul was dying. I was killing my essence of myself.”

Alley credits Scientology with her remarkable sobriety and overcoming her cocaine addiction.