Would Jermaine Jackson by any other name sing as sweetly? Prepare to find out, as the older brother of the late Michael Jackson has filed a petition with the state of California requesting a vowel shakeup! 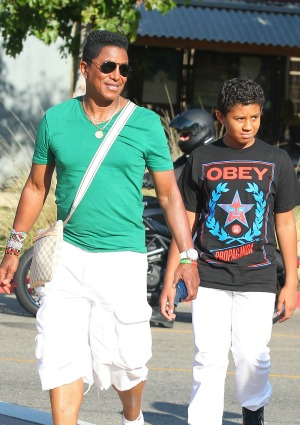 Jermaine Jackson’s name change isn’t as much of a shocker as it is a puzzler. Why go through the trouble of filing a petition if there’s only one little letter than needs a makeover?

The Jacksun name makeover has been confirmed by the singer’s rep, who pointed out, “His actual name has not changed. It’s just the spelling; [it’s] one letter. It is a personal choice of Jermaine’s, and it’s not a big deal.”

Not only is it not a big deal, but there’s a bit of fun with lyrics to be had about the seemingly silly desire to swap an “o” for a “u.”

“Phonetically, it changes nothing,” the rep added. “It is something he has chosen to do, and it’s fair to say that you cannot blame this one on the boogie — you’ve got to blame it on the sunshine.”

No word yet on whether Jermajesty, any of Jermaine’s five other children or any of the extended Jackson family members plan to jump on the Jacksun name-change bandwagon as well.