Ariel Winter’s brother, Jimmy Workman, says Ariel is lying about the abuse because she got in trouble with her boyfriend. 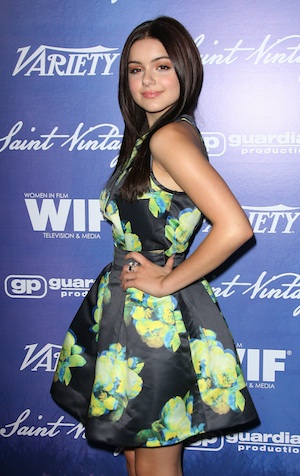 Today, truly horrific and tragic news broke about the physical and emotional abuse allegedly suffered by Modern Family‘s Ariel Winter at the hands her mother. We learned of Winter’s abuse ordeal when sources talked to TMZ and reported that just weeks ago, an emergency hearing was held to determine Ariel’s safety.

“Court sources tell us… on Oct. 3, after a guardianship hearing, a judge determined the allegations that Ariel was being physically and emotionally abused by her mother Crystal Workman were serious enough that the judge placed Ariel in a temporary guardianship with her older sister Shanelle Workman,” TMZ reported. “Our sources tell us… mama Crystal was ordered to stay 100 yards away from Ariel.”

The report cites slapping, hitting and pushing, as well as “vile name-calling, personal insults… and deprivation of food” as just some of the abuse Ariel claims she experienced at the hands of her mother.

Later this evening, however, the Winter family denied all abuse allegations. Ariel’s brother, Jimmy Workman, and Ariel’s mother both came forward and talked to Entertainment Tonight. Jimmy Workman said his mother is completely innocent of the physical and emotional abuse accusations and said the abuse claims have to do with trouble related to Ariel’s older boyfriend.

“The allegations are not true. This is stemming over a boy who is overage dating my little sister, my family had no idea about until the end part of it [sic]. It’s not true. There’s a mother who does everything for her children. So, this is just not right.”

When Entertainment Tonight pressed Jimmy on the issue by asking him about the specific abuse allegations made against Ariel Winter’s mom, including testimony Ariel’s mom slapped her, Jimmy was adamant it was all a lie.

He shook his head and simply proclaimed, “Not true. It’s an unfortunate situation.”

Jimmy also revealed Ariel refuses to talk to any of her family directly. Instead, she communicates through her attorneys and through her sister Shanelle, with whom she is staying. Ariel’s brother also denies the abuse Shanelle reported to police two decades ago.

“Look guys, I was there 20 years ago. I’m 32. That stuff didn’t happen. It stems from almost the same situation.”

This situation is awful on all levels, even if Jimmy Workman’s claims that the accusations are false and that Ariel Winter cried abuse as a mode of teenage rebellion are true. However, it seems hard to believe that a court would go so far as to remove Ariel from her home unless it had plausible evidence that Ariel was telling the truth about her home environment.

It’s not clear from Ariel’s mom’s statement whether the doctor in question is a physician or a mental health specialist like a psychologist or psychiatrist.

News of Ariel Winter’s abuse shocked the fans of Modern Family, a show that focuses on an unconventional family. Ariel Winter has not yet commented on the abuse claims.