The TV host only feels comfortable in front of a camera. But Bergeron said he actually suffers from social anxiety, so people get the wrong idea about him when he’s out in public. 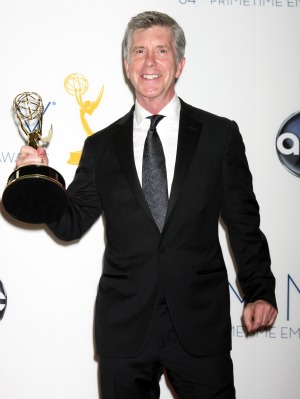 It’s hard to believe, but this season of Dancing with the Stars is the show’s 15th since it began in 2005, and Tom Bergeron has been there since the very beginning. The host says he knows reality shows don’t last forever, so he is just trying to enjoy it while it lasts.

“[I’ll host] ’til they drag me kicking and screaming off the set,” he told Access Hollywood, according to Yahoo! “Look, all shows, someday, come to an end. So, I’m just bankin’ it and having a ball.”

Bergeron is completely at home on TV, also being the host of America’s Funniest Home Videos and having hosted Hollywood Squares for six years. But he told Access Hollywood hosts Kit Hoover and Billy Bush that he feels most awkward when there are no cameras around.

“[I’m] perfectly fine [on TV],” he said. “Twenty million people? It’s like I’ve got bedroom slippers on… In real-life situations is when [I get nervous].”

Anyone who has watched DWTS knows Bergeron has no problem speaking to the camera, but he said it’s in the more intimate situations in life when things are different for him.

“It’s like my wiring is different,” he said, according to Yahoo! “My wife and I will go to a cocktail party, and she’ll make 40 new friends, and I’ll be looking at my shoes.”

The host worries that his anxiety and shyness may be misleading for people who see him out in public, but he says there is a simple explanation for the way he acts.

Bergeron has won both a Daytime Emmy Award and a Primetime Emmy Award for his different roles. He currently hosts Dancing with the Stars: All Stars, on ABC.