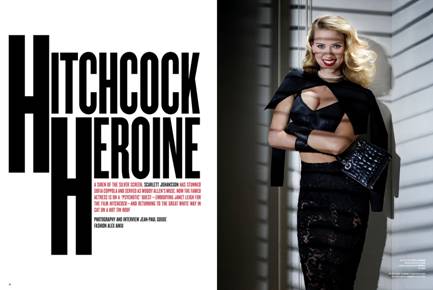 Scarlett Johannson is fully in character as Janet Leigh for the upcoming film Hitchcock — so much so that V Magazine decided to dedicate their cover shot to a Leigh-inspired shower scene re-enactment.

Beyond the stellar snapshot, Johansson sat down for an in-depth interview to discuss her role, working with Anthony Hopkins and even her personal sex appeal and her upcoming role on broadway. 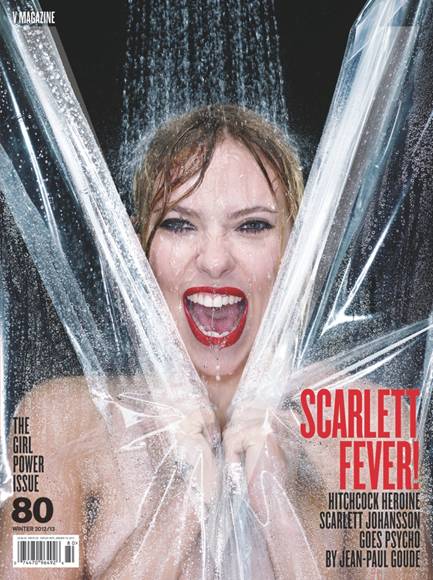 We can’t tell you everything, but V passed on some of the interview, and we’d like to share!

Johansson: “We only had the luxury to shoot the scene for a day, and everybody was feeling very nervous because it involved water, and nobody wants the actor to get wet. They were concerned with modesty and all these things — but I don’t care about any of that stuff, and Janet Leigh never did either. You have got to be brave, get into the shower, and face Anthony Hopkins as Hitchcock jabbing you in the face with a 12-inch kitchen knife, you know…”

V: About her sex appeal

J: “I think all little girls are aware of their sex appeal, I think probably more so when they’re pubescent. I mean, I remember being an extremely flirtatious little girl. I liked boys. I think I was also inspired by certain films I watched when I was a girl. I loved Judy Garland, and I loved these Rodgers and Hammerstein musicals, and I had this idea of romance — the dream girl getting the dream guy — and all that stuff.”

V: About her upcoming Broadway performance in Cat on a Hot Tin Roof

J: “It’s just that the last time I found my way onto Broadway, it was such a fresh and amazing experience… For this play, it’s going to be hard to live that many weeks in a state of embarrassment and regret and self-loathing and desperation and all the things the character has gone through. To live that eight times a week for two hours each time, and then all of a sudden, Monday comes around and you find the theater closed — you say to yourself, ‘Oh, what is different about today? Oh, right, I haven’t been in an emotional turmoil for 24 hours.’ So, I get a break from this, like, pulling at whatever you can to get where you need to go in the moment. I think it’s just not a natural state to be in, to constantly dig up what stirs and disturbs you and air it all out for everyone to see, so to speak. So the preparation for such a project is like you have to have a huge surgery or something, and you’re going to be out of commission for six months. It’s a big pill to swallow — a big, wonderful pill.”

For more on the interview and behind-the-scenes insight to everything Hitchcock and Johansson, be sure to check out the newest issue of V Magazine, which hits the newsstands Nov. 15.

And go see the film in theaters Nov. 23!