The stars have come out in support of Barack Obama’s win in the presidential race! Celebs tweeted their congrats to the prez as soon as the news was made official. 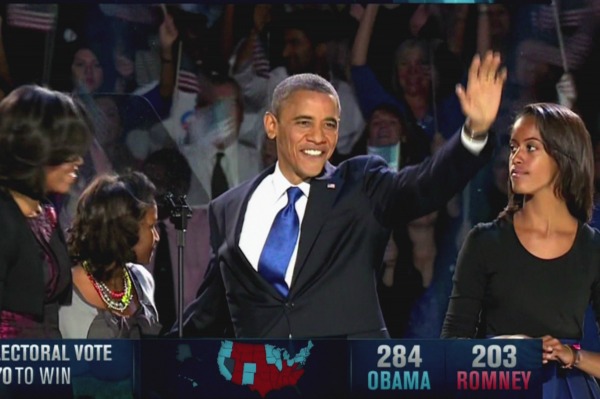 Congratulations, Mr. President! That seems to be the sentiment of the day — at least among the entertainment crowd. Stars have come out in droves on Twitter to congratulate Barack Obama on his win over Republican candidate Mitt Romney in the presidential election.

Here’s what they had to say:

Eva Longoria: “Amazing speech by @BarackObama re-elected for his 2nd term! America is and can be united for the greater good of all Americans!”

Lady Gaga: “I JUST GOT OFF STAGE IN COLUMBIA!! CONGRATULATIONS MR. PRESIDENT”

Katy Perry: “The people have the power! Proud to stand by you for 4 more years.”

Kim Kardashian: “Just landed! anxiously awaiting to see who the next president would be! Heard the good news!!!! Congrats President Obama!!!!”

NeNe Leakes: “I’m so proud to be apart of history again! #Obama … Romney can head back 2 Neverland”

Rosie O’Donnell: “A wonderful morning in Canada – so proud of the USA #democracylives”

Paris Jackson: “happy election day everyone…… hope some of you aren’t too upset , i know some pretty butt hurt people 🙁 ……goodnight xxo #loveobama2012 :)”

Ellen DeGeneres: “What an amazing night. Congratulations @BarackObama! I’m proud of our country.”

Russell Simmons: “A NEW AMERICA WINS OVER BIG MONEY! I am so proud to call Barack Obama our President of the United States!”

Cher: “LOVELIES WE WON ! WE WON ! YEAH WE WON ! GOD BLESS PRESIDENT OBAMA! have such a headache! TOLD A FRIEND IT’S 1 OF THE BEST NITES OF MY LIFE”

And of course, Beyoncé. While her Twitter feed remains silent, she did post a pic on her Tumblr of a slip of paper that read, “Take that Mitches.”