This week: Casey and Detective Voight continue to go head to head. If this clash doesn’t entail an all-out fistfight by the end of the season, it’ll be a shame.

Related story This Actor Is Leaving Chicago Fire, & It Will Never Be the Same 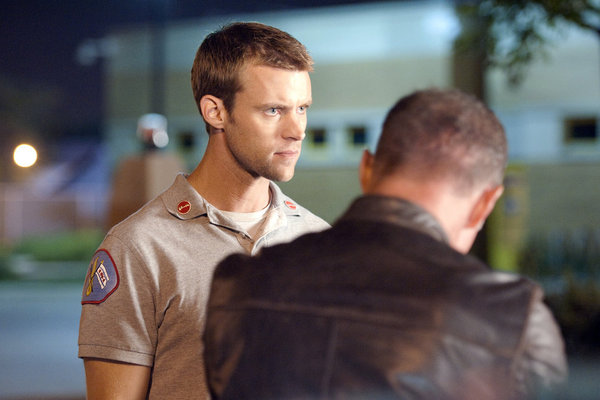 Chicago Fire is awesome. Not just for the hot guys and girls that sweat it out each week, but for the story line, the writing, and the continuity. For instance, unlike a lot of shows, not all of Chicago Fire‘s drama is wrapped up at the end of each episode. Just like life, some things drag on for awhile.

Take, for instance, Casey’s (Jesse Spencer) battle with Detective Voight. Voight’s juvenile delinquent son got into a drunken car accident. Now the dirty detective is practically stalking Casey in an effort to persuade him to change his report and keep Voight’s kid out jail… or worse, the news.

This week, Casey is having no more of Det. Voight’s creepy ways. Casey knows the cliché, “The best defense is a good offense,” has merit. So, he brings the fight to Voight.

Not only does he really tick off the detective, but he let’s the whole station know Det. Voight is up to no good.

In another preview, though, Voight is seen pulling over the car of someone close to Casey. Whether that happens before or after Casey’s outburst isn’t 100 percent certain, but it shows what kind of creep Casey is up against. His hissy fit at Voight’s office probably won’t be the last run-in the two have with each other. Here’s hoping we see some thrown punches soon!

Also concerning fans of Firehouse 51: Severide’s (Taylor Kinney) drug use is about to make things rough. According to TV Guide, the hunky firefighter’s arm will become useless during a rescue. He’ll be forced to turn to yet another way of coping with the toll his job takes on his body.