Donald Trump simply cannot handle the truth of Obama’s win. The mogul, who attempted to derail the president’s entire campaign for re-election, has had a near meltdown on Twitter in the wake of “four more years” becoming a reality. 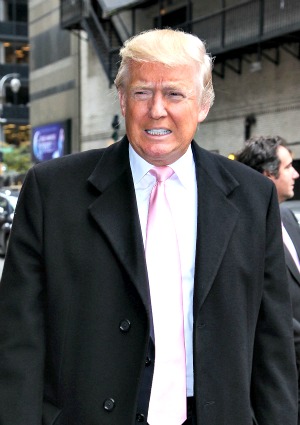 Wouldn’t you know Donald Trump’s got something to say about Barack Obama’s big win. The Mitt Romney supporter unleashed on Twitter Tuesday night, calling the 2012 election a “disgusting injustice.”

As Americans cast their votes Tuesday, Donald Trump remained calm, cool, collected, and most likely confident. Early in the day he tweeted to his nearly 2 million followers, “Whoever wins today, remember that tomorrow we still have a country struggling. Our work is not done until America is strong again.”

Sound advice — but apparently not words of wisdom he was willing to follow when the election win failed to go to Mitt Romney!

“We can’t let this happen,” Donald Trump’s election rant began, apparently under the impression something had gone wrong with the vote count. “We should march on Washington and stop this travesty. Our nation is totally divided!”

“Lets fight like hell and stop this great and disgusting injustice! The world is laughing at us,” the host of The Apprentice continued. “This election is a total sham and a travesty. We are not a democracy!”

Making a prediction for the next four years with Barack Obama again in office, the 66-year-old business magnate added, “Our country is now in serious and unprecedented trouble…like never before.”

“The electoral college is a disaster for a democracy,” Donald Trump’s tweeting spree continued before decreasing in pace. “Hopefully the House of Representatives can hold our country together for four more years…stay strong and never give up!”