Eddie Murphy still isn’t dead. Despite another round of erroneous reports claiming the actor had died, he’s not only alive and well, but he’s also kicking it with hot blonde Paige Butcher! 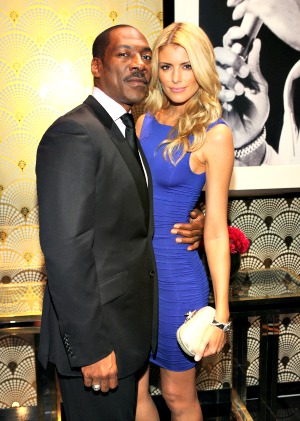 Eddie Murphy is not only not dead, but he also looks to be enjoying all life has to offer, with new girlfriend Paige Butcher by his side!

Friday night, the pair posed for photographers at Spike TV’s “Eddie Murphy: One Night Only” tribute in Beverly Hills. The 51-year-old looked both alive and well, with his arm around the 33-year-old Australian beauty’s slim waist.

Reflecting on the evening, Eddie Murphy told the crowd, “I’m just a retired, old song and dance man. That’s what you do when you’re retired: You come out every now and then and talk about the old days.”

CBS News reports the funnyman, who was romantically linked to Toni Braxton earlier in the year, “beamed” through the two-hour event in his honor.

“I am a very, very bitter man,” he is quoted as having told the audience. “I don’t get touched easily, and I am really touched.”

At the conclusion of the program, he took the stage and said, “This is really a touching, moving thing, and I really appreciate it. You know what it’s like when you have something like this? You know when they sing ‘Happy Birthday to You’? It’s like that for, like, two hours… and I am Eddied out.”

“The actor and novice snowboarder was vacationing at the Zermatt ski resort in Zermatt, Switzerland, with family and friends. Witnesses indicate that Eddie Murphy lost control of his snowboard and struck a tree at a high rate of speed.

“Eddie Murphy was airlifted by ski patrol teams to a local hospital; however, it is believed that the actor died instantly from the impact of the crash. The actor was wearing a helmet at the time of the accident, and drugs and alcohol do not appear to have played any part in his death.”

Again — Eddie Murphy has not died. He is, however, honored, humbled, hooking up with a hottie and presumably quite happy!

23 mins ago
by Daisy Maldonado