Despite being the poster child for proud plus-size women everywhere, actress Melissa McCarthy says even she has her moments when she wishes her waistline was a little less weighty. 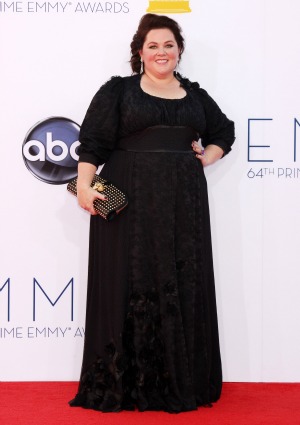 We love Melissa McCarthy exactly the way she is, and usually she does too — but not always. The Mike & Molly star says even she has her moments when Hollywood’s pressure to be perfect gets to her.

“Sometimes I wish I were just magically a size six and I never had to give [my weight] a single thought,” McCarthy admits in the December issue of Good Housekeeping magazine. “But I am weirdly healthy, so I don’t beat myself up about it — it wouldn’t help, and I don’t want to pass that on to my girls.”

McCarthy says her weight is not caused by overeating — quite the contrary. “I don’t really know why I’m not thinner than I am,” she muses. “I don’t really drink soda; I don’t have a sweet tooth, and we eat healthfully at home.”

McCarthy is smart enough to know that even if she was a size six, chances are she probably still wouldn’t be satisfied — because few women ever are.

“Pretty much everyone I know, no matter what size, is trying some system,” she says. “Even when someone gets to looking like she should be so proud of herself, instead she’s like, ‘I could be another three pounds less; I could be a little taller and have bigger lips.’ Where does it end?”

So at the end of the day, the actress has decided to be at peace with who she is, double-digit dress size and all. “You just have to say, ‘It’s pretty damn good. I am right here at the moment and I’m OK with it.’ I’ve got other things to think about.”

Read the entire interview with Melissa McCarthy in the December issue of Good Housekeeping, on newsstands Nov. 13.