Can Disney lure Harrison Ford back to Star Wars? The actor, who brought Han Solo to the big screen, could appear in future sequels. He’s keeping his options open. 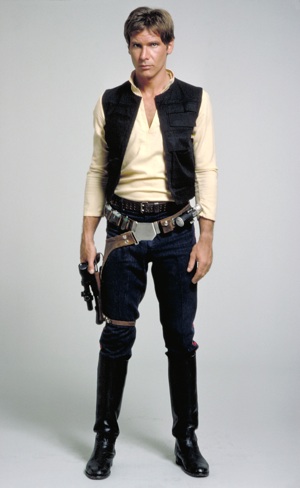 When it comes to Hollywood, anything is possible. Last week, we witnessed a major deal between Disney and Lucasfilm. The House of Mouse bought George Lucas‘ company for a cool $4 billion.

With Disney’s acquisition came another major development: There’s more Star Wars in our future. Two trilogies with a total of six films just wasn’t enough. Disney announced that Star Wars: Episode VII is in development and slated for a 2015 release.

Where will the story go? We’ve already seen Luke Skywalker’s journey from novice to Jedi and Anakin Skywalker’s transformation from Jedi to Darth Vader.

Luckily, when it comes to Star Wars, the universe goes beyond film. There are countless novels, animated series and spin-offs Disney can pull from.

Can Carrie Fisher fit into her Princess Leia bikini now? >>

The bigger question is, who will return? Hamill and his onscreen sister Carrie Fisher (Princess Leia) spoke to Lucas about another sequel last summer. But all eyes are on Harrison Ford, who played Han Solo in the original trilogy.

According to EW, the 70-year-old actor wouldn’t mind revisiting his Star Wars roots.

A source close to Ford says, “Harrison is open to the idea of doing the movie, and he’s upbeat about it; all three of them are.”

That’s quite a turnaround, considering Ford’s past remarks about the character.

In a 2010 interview with ABC, Ford said Solo “was not so interesting.”

Do you think Ford should return to the Star Wars series?