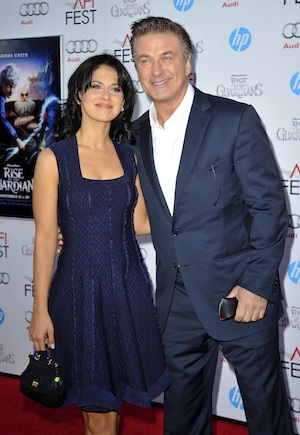 One of the funnier pictures of Alec Baldwin emerged over the weekend: the star doing pushups in front of a Los Angeles office building (it actually might be a gym, we can’t be sure). Paparazzi caught Baldwin and wife Hilaria Thomas in workout gear in the sunny Los Angeles weather on Saturday afternoon. Thomas looked on, more concerned with her cell phone, as Alec did pushups on the cold, hard concrete.

What’s the need for such a public fitness display? Well, Hilaria Thomas is a whole quarter-century younger than Baldwin. Okay, maybe that was a bit too dramatic — she’s 26 years younger than Baldwin: Hilaria is 28 and Alec is 54. Baldwin showed off his much lighter frame in January 2011 when he lost 30 pounds over four months.

Us Weekly says Baldwin’s fitness routine centers on low-impact cardio and diet changes. “I gave up sugar… I do Pilates and spin, but I don’t do as much yoga as I’d like” said Baldwin to the magazine. “When we’re shooting [30 Rock] and I can’t work out, I just have to eat less. So I’m very conscious of that. But sugar was the real killer for me — that was the problem.” (We’re with you on the sugar, Alec — except we’re still in the process of reversing our sugar-to-gym ratio).

But seriously, Alec Baldwin’s wife, Hilaria Thomas, is a NYC yoga instructor at Yoga Vida and has a background in ballet and ballroom dancing. So maybe she’s a motivating factor behind Baldwin’s fitness commitment. Maybe Alec Baldwin should do Dancing with the Stars? That would be awesome.