Sweets is having trouble coping with his breakup with Daisy, so he moves in with Booth and Brennan. I wonder how long this will last. 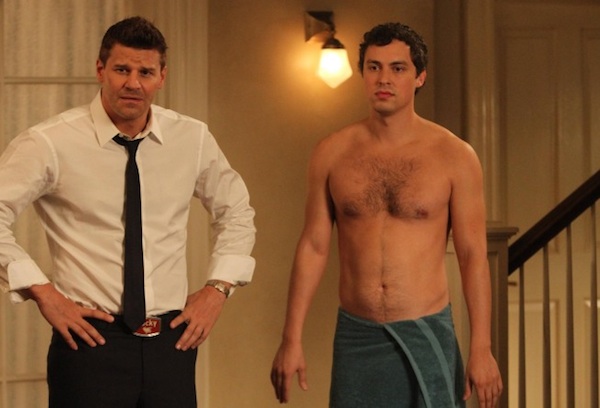 Hey Bones Fans, don’t you remember right before the World Series that Sweets (John Francis Daley) broke up with Daisy? He gave the whole “I just don’t want that kind of commitment right now” speech on the front doorstep right after they signed the lease and moved in together. Oh, you remember that, too? That’s funny, because I don’t think Sweets remembers it. Instead, he’s acting like a giant mopey pants, like he was the one who was dumped. He’s pining away and even sleeping in the office because now he’s homeless. And really, whose fault is that?

Where did this guy live before and can’t he just go back there? He’s a professional, a grown-up, can’t he afford a new apartment? Apparently not. Instead, he is taken in by the generous Brennan (Emily Deschanel) and the less-enthusiastic Booth (David Boreanaz). He helps fold laundry and vacuum and even helps himself to Booth’s glorious jet-powered bathtub. Maybe he’s just a little too comfortable too soon.

Booth seems to think so, but he also thinks Sweets needs some time to get back on his feet and offers him to stay for a few more weeks. It’s a fun dynamic, but I’m not really buying it for any of these characters. Besides, what happened to the cute agent he was flirting with earlier in the season? Can’t he just get with her and get back to not being the focus of attention? 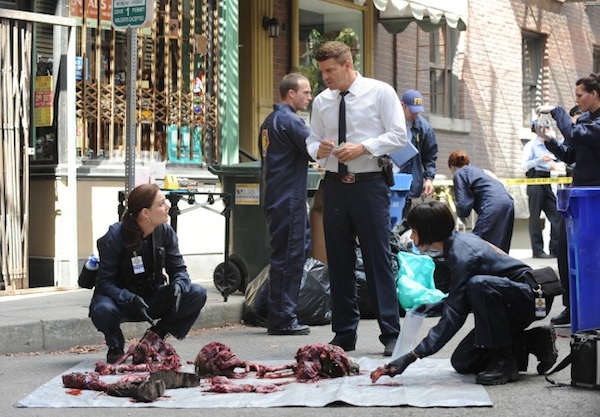 The case this week was, um, unique. The owner of a artisan applesauce (which costs nine bucks a jar) had her skin ripped off and was deeply cut to the bone all over her body. They do enjoy the gore on this show. So, it turns out this entrepreneur was moonlighting as a prostitute on the side. So, Fisher puts it together that our killer must be copying Jack the Ripper, which leads the investigation severely off track.

This was not a serial killer, a deranged John, or a crime of passion from a twisted individual who has the time and know-how to slice up a body in perfect 45-degree angle incisions and remove the skin. No, this was definitely murder by machine (which I thought was obvious from scene one, writers).

The suspect who finally confessed to the crime was the victim’s partner. They got into it when the victim wanted to start making more money on her products, which seems to be a betrayal to the artisan way. It’s totally OK to make money off of your body, but not your applesauce??? Either way, she was accidentally pushed into the giant rotating spice blender and you can imagine all the gory details from there.