Luckily, the cast can fall on smart and funny writing as the only thing keeping Gossip Girl afloat as the final season continues to flounder.

Executives from The CW network deserve a lot of credit for how they handled their programming last week while the entire Northeast braced for Hurricane Sandy. CW execs opted not to air Gossip Girl’s fourth episode of the final season last Monday, instead showing a rerun of the season premier. It was the right call and show of good faith.

Sadly, wise decisions by the network brass could not make up for yet another disappointing episode. The weeklong postponement did little to salvage a show that is floundering. With too much happening too fast, storylines continue to elude viewers while crossing into the realm of absurdity.

In Episode 4 — “Portrait of Lady Alexander” — we’re spoon-fed a typical Gossip Girl recipe for drama that unfolds at a high-society event where we get to see a lot of rich people in fancy outfits doing rich people stuff that only Upper East Siders know how to do.

Most of the usual gang convenes at an equestrian meet (and here we were thinking the only people who care about horses jumping for sport are British royals!) where we find Nate (Chace Crawford) spending quality time with his jailbait girlfriend’s (Leighton Meester) father, Blair and Chuck (Ed Westwick) hot in pursuit of “Lady Alexander,” while Serena (Blake Lively) and her mother argue over the revelation that they share more in common than blonde hair.

Oh, and somewhere in Brooklyn, Rufus and Ivy are still making out.

The lone bright spot in Episode 4 is the script, which delivered more quick-witted puns than an Obama cross-examination.

So, since Gossip Girl’s sixth and final season appears to be stuck in a horses and bayonets era, let’s find some bright spots while breaking down, in no particular order, the five most memorable quotes from “Portrait of Lady Alexander.”

“I heard they lost a fortune in Facebook stock.” – Blair

Show creators/writers Stephanie Savage and Josh Schwartz show their pop culture savvy by taking dead aim at Mark Zuckerberg. Coming out of Blair’s mouth, the economic jab at the social media tycoon is smoothly delivered in a Waldorf kind of cool that oozes Upper East Side eminence.

“I’m dating your ex and that cancels out any sirs.” – Steven Spence 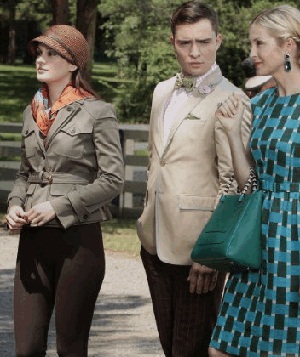 The episode’s biggest bombshell is the scandalous disclosure that Serena, who is in love with Steven, dated Nate, who is hooking up with Steven’s high school-aged daughter Sage. Steven discovers the creepy connection while perusing Dan Humphrey’s most recent exposé, which is not read in the Spectator since Dan sold Nate out for Vanity Fair. Inspired to discover the truth, Steven demands Serena share their previous romps for, you know, the good of the relationship.

This only foreshadows disaster, but for the time being Steven demonstrates he’s willing to give Nate a chance, and we later see the two sharing a chummy moment while discussing sports at the equestrian meet. All appears well until…

Steven’s plan for full disclosure backfires when Lily van der Woodson crashes the horse-riding party. As if it’s not bizarre enough that Steven’s dating his daughter’s boyfriend’s ex, we find out he once shared a wild night at some European ski resort with his girlfriend’s mom that involved a lot of whiskey and painkillers. Yikes!

Yet no matter how many variables you insert into this lover’s quadratic formula, Serena’s commitment to Steven is emboldened by the bizarre turn of events, and by the end of the episode, they’re able to “make new images” and put the weirdness behind them.

Here’s where you have to give show creators Savage and Schwartz credit for pushing the boundaries of incest on a teenage drama while at the same time managing to eclipse the Kim Kardashian-Kris Humphries relationship for plausibility.

“Suck it up, Humphrey. They have pills for that.” – Georgina Sparks

Dan (Penn Badgley), once the show’s moral crusader, is seen throughout the fourth episode relishing in his newfound fame. With the aid of Georgina (Michelle Trachtenberg), Dan begins a quest to align himself with suitable bedmates — the Ivy League types — to broaden his writing and marketing appeal.

Even with Georgina challenging his manhood, Dan seems disinterested, and his subplot plays a minor role in this week’s installment. That is, until the end of the episode, when in somewhat of an effective plot twist, he shows up at Blair’s apartment looking for a place to crash.

Where’s Nelly Yuki when you need her?

We just hope Blair suggests Humphrey visit the barber before Episode 5 for a Chuck Bass-like haircut (who knew the 1920’s gangster coif made a comeback?). And speaking of Chuck…

“Sorry. International affairs are not my area of expertise. Well, at least not this kind.” – Chuck

It’s only fitting we end on a Chuck Bass (Ed Westwick) zinger since the episode centered around Chuck and Blair’s quest to track down Lady Alexander.

After receiving a tip from a random dude in a sweaty gym during the previous episode, Chuck and B’s search sends them from a hipster art gallery to the posh stables of a Princess Jasmine (sorry, we stole that one from Blair) lookalike.

Lady Alexander turns out to be a thoroughbred purchased by Bart Bass from a Sudanese sheikh. Together, Chuck and Blair uncover that the elder Bass used the horses as part of an elaborate money-laundering scheme to hide his profits in an illegal oil deal. The horses were all part of Bart’s Houdini act to stay out of federal prison.

You have to hand it to Gossip Girl once again. It’s the only show on television that teaches you international law and relationship advice while reminding you that nothing’s more absurd than life on the Upper East Side.