The actress, whom audiences know best as the middle sister on 7th Heaven, is all grown up and has announced she is having a baby. 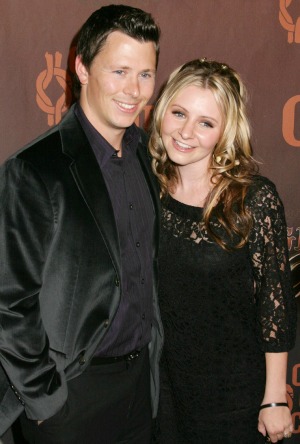 “We are so thrilled to be becoming parents,” Mitchell said, according to Yahoo!. “It couldn’t be a more exciting time! Thank you for all the well wishes!”

Mitchell is best known as middle sister Lucy Camden on 7th Heaven (even though she is actually older than Jessica Biel), but it looks like she is all grown up. According to Yahoo!, she married husband Michael Cameron, an accountant, four years ago. The former child star said she took nine pregnancy tests before she actually believed it was true.

“I took seven pregnancy tests,” Mitchell told People. “I went to the doctor and had two more tests and they were like, ‘Bev, usually when the first one comes out positive, the rest of them will all say the same thing.'”

But the 31-year-old actress (and country singer) knew something was up when her body started feeling different, around four months ago.

“My sense of smell was off the charts, to the point where I could smell a kid’s dirty diaper from the other side of a restaurant,” Mitchell told People.

Mitchell was one of the few guests invited to former TV-sister Jessica Biel’s wedding and told her the news while she was there.

“Jess was one of the first to know [the baby news]. I started crying,” Mitchell said. “It was really exciting to share that with Auntie Jess.”

Mitchell and Cameron have not announced a potential birth date, and it may be too early to know if they are having a boy or girl. Mitchell did talk to People about attending her friend’s wedding week in Italy.

“Going to any wedding pregnant is definitely an experience if you’ve never done it before,” she said. “I’m just absolutely thrilled to see my best friend marry her best friend.”