Taylor Lautner has not only played a part in Twilight‘s Edward, Bella and Jacob love triangle, he’s quite often third wheel when it comes to real-life interviews with Kristen Stewart and Robert Pattinson. Considering her recent cheating scandal, that’s quite an awkward place to be when certain subjects arise! 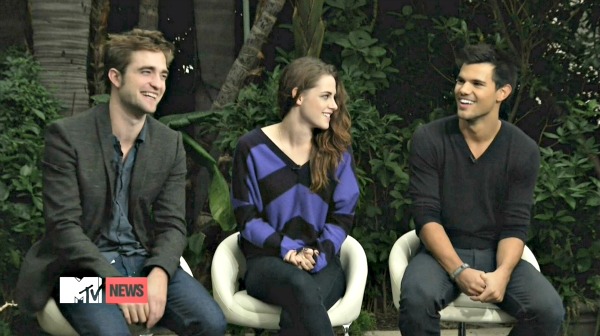 Both onscreen and off, Taylor Lautner can’t get away from Kristen Stewart and Robert Pattinson’s drama. The guy known best as hunky beast Jacob recently spoke very carefully when asked about Stewart’s cheating scandal, though others from The Twilight Saga cast have been more forthcoming about their own love mishaps!

“To be honest, I’ve never been involved in any of those situations, so I don’t know [if trust can be regained],” Lautner replied when asked about cheating by Cosmopolitan magazine. “It would be just a guess and a shot in the dark, and I don’t want to give that if I haven’t even been there myself.”

Despite pleading the fifth on the subject entirely, he added generously of Stewart, “Kristen is fantastic at everything she does. I’m always proud of her.”

While Taylor Lautner, seen here promoting Breaking Dawn Part 2 with Kristen Stewart and Robert Pattinson on Nov. 1, makes for a diplomatic third wheel, other vampire friends have more to say on the subject.

“Honestly, I used to cheat so much it would be very hypocritical of me to pass judgment on Kristen,” Charlie Bewley of vampire Demetri fame told Us Weekly previously. “I know what it’s like to have an inflated libido. Probably why I’m not in a relationship right now.”

Daniel Cudmore, who you may recall as vampire Volturi coven member Felix, chimed in, “I mean, s**t — 22 years old. Think of how many mistakes you made at 22 years old,” he said, coming to Kristen Stewart‘s defense. “The problem is we’re in the spotlight, but, whatever. It’s a relationship, and people go through ups and downs and they have their problems.”

Can you as easily forgive Kristen Stewart as her Twilight castmates seem to?