Kristen Stewart realizes there is life beyond Bella Cullen and focuses on the next step in her career. 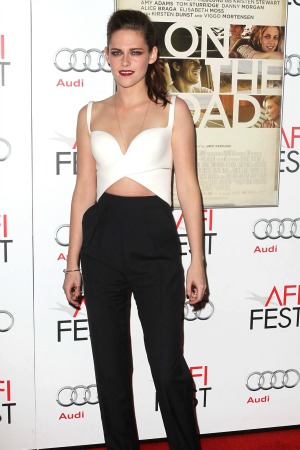 Kristen Stewart is already looking for her next big career move. The Twilight Saga actress has some serious films in the works for her post-Bella life.

The Breaking Dawn, Part 2 star was seen this past weekend in Los Angeles at the AFI Fest premiere of On the Road, the big-screen adaptation of the infamous Jack Kerouac novel. The film also stars Amy Adams and Garrett Hedlund and is expected to hit the big screen on Dec. 21.

She was pretty relaxed walking down the press line on Saturday night after she had spent an entire day promoting the final film in the Twilight series.

Stewart, who plays the beatnik character MaryLou in the film, told The Hollywood Reporter that the role, “definitely helped me break down a few walls.”

Besides the Kerouac role, it is rumored that the actress will sign on for an upcoming comedy called Focus. The 22-year-old would star alongside the hottest actor this season, Ben Affleck, as two con artists whose work and personal lives begin to blur when they fall in love.

According to Variety, the roles were originally offered to Ryan Gosling and Emma Stone, but neither actor was able to commit to the filming schedule due to other projects.

While this may be exciting news for the young star, the fans are already buying tickets in anticipation of the Nov. 16 release of the final Twilight film. It will mark the end of a long journey for Stewart and onscreen/offscreen love Robert Pattinson.

The two recently have rekindled their rocky relationship after the summer cheating scandal. They were both seen at the AFI after-party at the Hollywood Roosevelt Hotel on Saturday night hanging with friends until midnight. It looks like Bella and Edward truly are “forever.”