It’s all about wedded bliss in The Hamptons — from a sham wedding to a real proposal. But a frozen dead man and nosy Mason are going to make things a little less blissful. 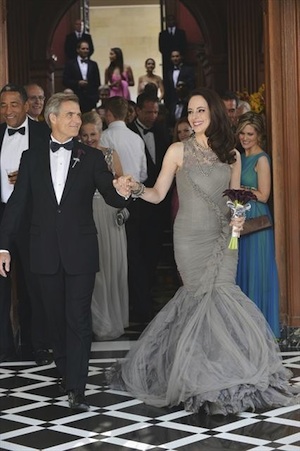 The great thing about being filthy rich is that time is never an issue.

For Conrad (Henry Czerny) and Victoria Grayson (Madeleine Stowe ), an elaborate wedding that should take months to plan happens in the span of weeks just so they can get the inconvenience of marriage over with and on to scheming.

Wearing a Vera Wang gown and a sourpuss more suited for a funeral than a wedding, Victoria gets a very important phone call just moments before she gets hitched that could end her nightmare of living with Conrad for good.

See, Emily (Emily VanCamp) needed a way to get that pesky Mason off of her back. So, not only did she provide documentation to fake Amanda that proved she had her burn scar removed, but she also distracted his attention to the Graysons.

Apparently, The White-Haired Man has been dead and kept for safe keeping in a freezer. She defrosts him (but that also happened really quickly. It takes like half a day for me to defrost chicken and this guy is the size of 50 chickens, so I’m not buying it), and leaves his cold body to be discovered by Mason. Next to the body she planted one of Conrad’s cufflinks.

So, back at the wedding, after receiving this glorious news, Victoria says her nuptials and the cops rummage through their home, unbeknownst to Conrad. In the trunk of his car, they find the murder weapon and in the house they find the other cufflink. During the lovely reception Conrad is whisked away by the police and Victoria plays the dramatic, completely caught-off-guard newlywed.

That wasn’t the only drama at the wedding, however. Emily went as Aiden’s guest, but shared a little dance with Daniel. Daniel was feeling rather nostalgic and asked his former fiancé if she ever thinks about how things could have turned out for them. Even though she says she tries not to, there seems to be some lingering feelings between the two. And, not surprisingly, Ashley is trying to mask her jealously and fear of losing her newfound position in the Grayson household. Aiden isn’t too cool with it either. 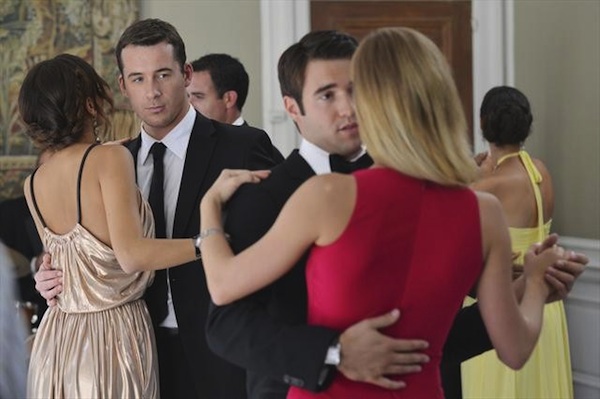 On the other side of The Hamptons, Jack (Nick Wechsler) had the reopening of his bar to a great crowd. But, his bigger news is that he proposed to Amanda! Well, of course, she said yes! He’s pretty much the only thing she’s wanted since she stepped foot in The Hamptons. Sometimes I wonder, though, if he’s really in love with her or he’s just in too deep?

All this love drama aside, something really bad happened for Emily. Really bad. Victoria let it slip to Mason that Emily used to be in juvie. It didn’t take him long to put the pieces together. Although he didn’t say the words in this episode, we were certainly led to believe he thinks Emily is the real Amanda Clarke. Ooohhh, girl’s gonna be in trouble. How will she manipulate her way out of this?