Our favorite girl-next-door gets her due wake-up call in the most unusual way. 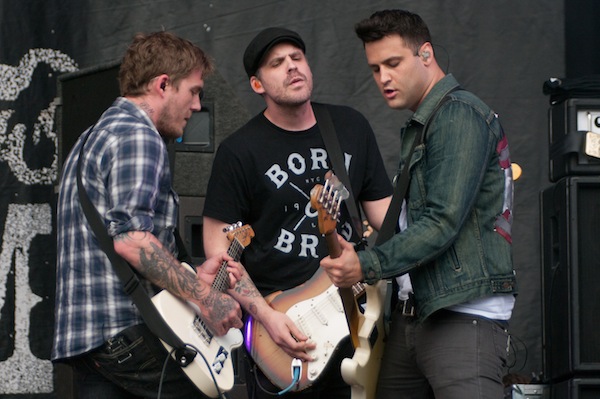 The Gaslight Anthem’s latest music video features clips of the band facing an enthusiastic crowd and the personable Elisha Cuthbert, as a dejected girlfriend unhappy in her current relationship. Who hasn’t been there? We all have. But this video enlightens us all with a completely unrealistic depiction of her wake-up call into walking away from her status quo.

Taking the magic of movies literally

I never go to movies expecting relationship advice. I don’t think the lead female character intended to, either. But the band’s very “Hollywood” re-telling of Cuthbert’s road to an epiphany is humorous and unexpectedly profound.

You see Elisha by a ticket for herself to go sit in an empty theater, and while looking adoringly at the romantic couple interacting on-screen (it reminded me of how I was during Reese Witherspoon‘s, “This Means War), she magically ends up replacing the girl in the movie. As a part of the movie, she finds herself dating the handsome hero. He adores her, cuddles (gasp!), and takes her on elaborate dates. Although obviously acknowledging how artificial it is, Elisha’s character seems to take away a lesson.

The ending of the video took me by surprise, as she walks out to see her boyfriend, holding flowers (the same boyfriend that yelled at her at the beginning, mind you). Fighting is normal, sure, and I figured she would be happy to see him make the kind gesture. Instead, she walks right past him, accompanied by a confident smirk that crawls upon her face.

I wonder which genius came up with the plotline, but I didn’t expect this much contemplation and shock after watching it. Rather than get caught up in the romantic acts themselves, the character learns that she should instead focus on deriving the kind of baseline happiness she deserves. This wasn’t the regular love song or break-up song at all.

This is a music video for those who can’t seem to break out of the same cyclical problematic relationship!