A tribute to the FORWARD campaign in favor of four more years for our president, these stars rally together in support for this moving music video. 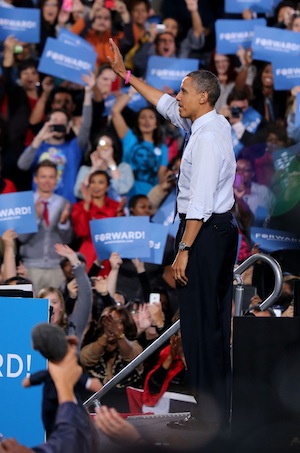 You think we can keep the politics out of this?

Obviously not. But, whether you’re a Democrat or a Republican, good music is good music. Yes, this is hardly a stand-alone song for humming to years from now, but this collaboration was an unexpected and pleasing one. While Ne-Yo took a break from his club anthems and soulful ballads, he was joined by Goo Goo Dolls singer Johnny Rzeznik, pop singer Natasha Bedingfield (where has she been?!), and music legend Herbie Hancock. An up-and-coming band, Delta Rae is also featured.

If it seems familiar, it’s because it is piggy-backing off the purpose of the “Yes We Can” music video back in 2008. The Huffington Post, in an article by Fred Goldring, discusses how this “Forward” video may be compared to the historically successful predecessor. With the aid of Grammy Award-winning producer John Shanks, it’s hard to assume that it wouldn’t be as effective.

It’s tough not to attribute Katy Perry to the FORWARD campaign, or Jay-Z and Beyoncé as the forefront of presidential support (who didn’t want to go to that dinner?), but the artists in this video helped make aiding more accessible. They contributed to a memorable video of quotes, pictures, and citizens coming together to support a leader they believe can maintain the change they believe has been much-needed. By spreading their grass-roots music, their campaign reach may go further.

Sung with unbelievable passion and conviction, the images of hands in the air with four fingers outstretched walking the streets (obviously indicating their support of four more years) are ones that will stay in your mind past its duration.

The unity of so many different types of people, the cooperation, and togetherness is heartwarming. Strategical, but insightful, I certainly had a lot more to think about after watching.

Go out and vote!