Lady Gaga may be a fan of Adele’s music, but Ms. Germanotta has her wires crossed when it comes to weight! Claiming the new mom hasn’t had much criticism about her physique, the “Born This Way” singer says the scrutiny on herself just isn’t fair. 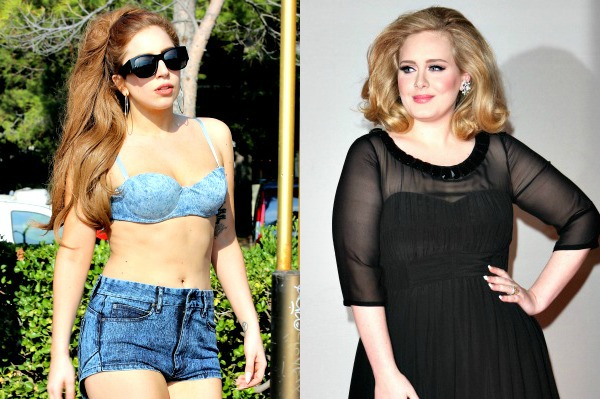 Lady Gaga somehow doesn’t know that both her weight and Adele‘s weight have been headline news in the press. The costumed singer, who recently set about starting a body image revolution after being labeled “fat” in the tabloids, seems to believe she’s the only one being picked on.

Addressing the way her weight gain played out in the press and in her personal life, 26-year-old Lady Gaga recently told Stylist.co.uk, “I was acutely aware of some photos on the Internet — my mom called me and was like, ‘Did you gain weight?’ — everybody was telling me about it, and I didn’t really care.”

“I thought, well I don’t really care if they think I’m fat, because, quite honestly, I did gain about 30 pounds.”

“Adele is bigger than me — how come nobody says anything about it?” Lady Gaga went on to ponder before dishing out a string of compliments about 24-year-old Adele.

“She’s so wonderful, and I think her confidence is something I have to match,” Gaga gushed of the songstress, who became a mom in October. “She has set the bar very high for a lot of women. I need to be a confident woman and just say politically active things when I can that are helpful to young people.”

Not only did designer Karl Lagerfeld publicly call Adele “a little too fat” earlier this year, but news of her son’s birth was met with a string of fat jokes and outright hate.

Twitter trolls inexplicably sent out messages speculating Adele’s baby is “fat and handicapped,” with one going so far as to say, “Just murder it already.”

Apparently unaware of the drama her fellow songstress has gone through as well, Lady Gaga closed the weight discussion by suggesting, “We should all make an effort to be nice to one another all the time.”

Do you think Adele or Lady Gaga has received the worst of the weight scrutiny?