In round two of billionaire shenanigans, Mark Cuban has an offer for Donald Trump! What does the business magnate want the blustering real estate tycoon to do? Bid his bouffant goodbye! 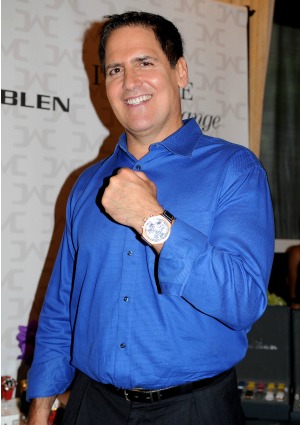 Mark Cuban is one man with the capacity to make our wildest dreams come true. Although time has run out on Donald Trump’s $5 million offer to Barack Obama, the owner of the Dallas Mavericks is upping the ante!

Mark Cuban, who you may recognize as one of the investors on Shark Tank, is one billionaire who’d love to see Donald Trump‘s trademark bouffant go bye-bye. Putting his money on the table to try and make it happen, the 54-year-old has an offer for the Trumpster.

“The offer he made for $5 million, that was one of the dumbest things ever,” Cuban said, ripping Trump’s Obama stunt. “But I thought about responding to him.”

Explaining what he’s willing to give to see The Apprentice host take a pair of clippers to his curious hair poof, Mark Cuban told a Fox network affiliate, “Maybe I’ll put up a million or two million if he’ll shave his head. What do you think?”

Getting serious, Mark Cuban then looked straight into the camera and reiterated, “Donald, you shave your head, a million dollars to any charity you want.”

No word yet from Donald Trump regarding Mark Cuban’s offer, despite his being quite active on Twitter, as usual.

He went on to tweet Friday, “If I would have offered Obama a billion dollars to show his records, he would have refused.”

A million, $5 million — a billion? There are some seriously high-stakes wagers happening here!

Do you think Donald Trump will take Mark Cuban up on his $1 million offer?