Evan Rachel Wood is proud to be bisexual, but if she’s now a married woman, how does that work, exactly? The wife of Jamie Bell has happily explained what’s changed — and what hasn’t — to a curious Twitter fan. 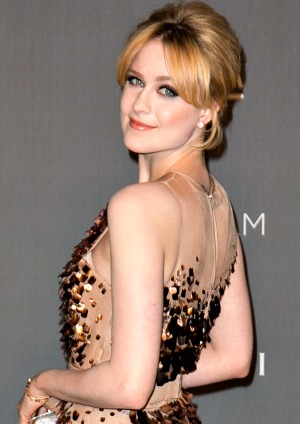 Has Evan Rachel Wood kissed her bisexual side goodbye since marrying Jamie Bell? Absolutely not, though that doesn’t mean that nothing’s changed since becoming a married woman.

Trying to figure out exactly how being married and bisexual works, one curious Twitter user recently tweeted to the True Blood actress, “Honestly not trying to be an a**. Just trying to understand. Does this mean you are not bi anymore? How does that work?”

With trademark honesty, Evan Rachel Wood replied with a wink, “No, it just means I am not single anymore. ;)”

The 25-year-old told Esquire previously, “I was always into very androgynous things. Guys, girls… I’m into androgyny in general.

“I’m more of like the guy when it comes to girls. I’m the dominant one. I’m opening the doors, I’m buying dinner. Yeah, I’m romantic.”

Evan Rachel Wood, known to many for her portrayal of lesbian vampire queen Sophie-Anne on True Blood, is in good company with former co-star Anna Paquin — also a married bisexual.

In May of 2012 Paquin explained, “I’m someone who believes being bisexual is actually a thing. It’s not made up. It’s not a lack of decision. It’s not being greedy or numerous other ignorant things I’ve heard at this point. For a bisexual, it’s not about gender. That’s not the deciding factor for who they’re attracted to.”

What do you think of Evan Rachel Woods’ bisexuality explanation?