Is no one safe? The USA Network has cut the fat from its plump lineup. It’s canceled not one, not two but three shows, including Political Animals. If Sigourney Weaver can’t make it, then no one can. 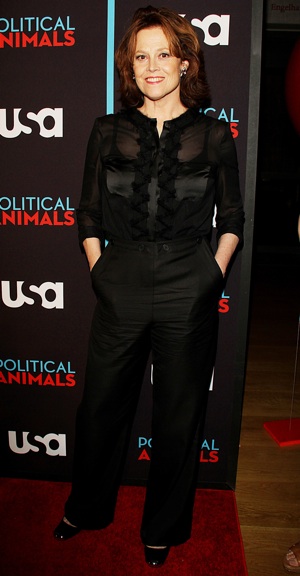 The USA Network has brought down the hammer of three of its shows. Political Animals, Fairly Legal and Common Law have all been canceled. Animals was described as a limited series event, while Fairly Legal had two seasons under its belt.

According to TVLine, Common Law was scrapped after just one season. The series starred Michael Ealy and Warren Kole as the “Odd Couple” of cops. Unfortunately, their weekly adventures weren’t enough to bring in viewers. The show averaged around 2.1 million.

As for Fairly Legal, USA tried to lighten the blow with some positive news. Instead of focusing on the cancelation, the network wants us to know that star Sarah Shahi has a new job.

In a statement, USA said, “We are proud of Fairly Legal and thank the very talented cast and crew for two fantastic seasons. Sarah Shahi is undoubtedly a star and we’re thrilled she’ll be joining our sister network NBC on Chicago Fire.”

Is that comforting to know?

Sigourney Weaver‘s Political Animals was a critical hit, but the ratings didn’t deliver. It averaged 3.2 million a week, which wasn’t enough to keep USA interested.

“We are proud of Political Animals, our miniseries that attracted critical acclaim and impacted the cultural conversation this summer,” the network said in a statement. “It was a pleasure to work with Greg Berlanti and Laurence Mark and a powerful cast led by Sigourney Weaver. We look forward to collaborating again with these immensely talented creatives.”

That’s three shows down in a matter of 48 hours. Perhaps we should look on the bright side. These are gone, but USA announced return dates for Suits (Jan. 17), White Collar (Jan. 22) and Necessary Roughness (Jan. 23).

Which show will you miss the most?