Brad Paisley and Carrie Underwood are old vets when it comes to hosting the CMA Awards. Was the 5th time the charm? We think so! 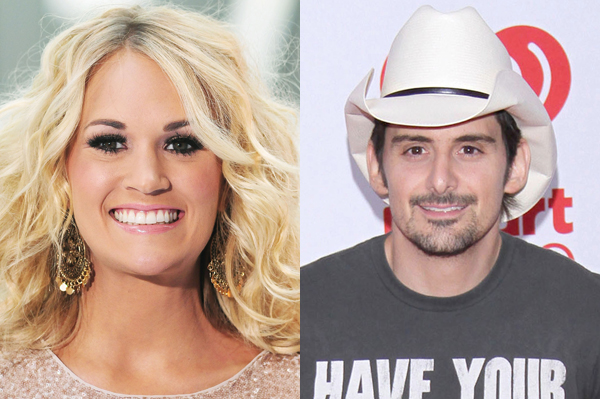 Carrie Underwood and Brad Paisley make hosting the 2012 CMA Awards look easy. The superstar duo resumed their hosting duties Thursday night for a fifth time — and we have to say, they hit their peak early.

The pair wasted no time in making references to current goings-on in country music, including some (surprisingly) good “Gangnam Style” dance moves, and of course, some good ole-fashion motorboatin’.

You motorboatin’ son of a…

One of the running jokes of the night was the meaning behind “motorboatin'” in Little Big Town’s hit song “Pontoon.” Paisley “didn’t know” about motorboating until the band told him about it.

“Oh my stars, Brad Paisley, you just told my mama what motorboatin’ is,” Little Big Town’s Kimberly Schlapman said as she accepted the award for Single of the Year.

Paisley wasn’t about to let the joke drop after that.

“By the way, Kimberly, your grandmother unfriended me on Facebook. And she wants you to call her.”

Taylor Swift might be flying high, thanks to the success of her new album Red, but she was shut out of all her nominated categories. You can’t win ’em all, Taylor. Still, her superstar status didn’t keep Underwood and Paisley from making fun of her revolving list of boyfriends — including her recent breakup with Conor Kennedy.

“The greatest trade of the year had to be the Kennedy family. They somehow traded Arnold Schwarzenegger for Taylor Swift,” Paisley deadpanned to the crowd, including Swift, who was sitting in the front row. “I mean, what they got for that…”

Clay Walker goes gaga over his wife on the red carpet >>

Underwood soon cut him off to tell him of their sad breakup.

“What? Why don’t I ever hear about these things?” Paisley said. “I’m the last one to know.”

“Are they ever gonna get back together?” he asked.

Why Carrie and Brad work so well together

Underwood recently told reporters that their rapport onstage is the the same as it is offstage.

“He’s not a different person in front of the camera and a whole different person away from the cameras,” she said. “He is the way you think he is. It’s really great to see how somebody has balanced family life and doing this, you know, being in our crazy world.”

What was your favorite moment at the 2012 CMA Awards?