Taylor Swift’s ex-boyfriends are all in hiding today after the 2012 CMAs opening monologue becomes all about the country singer’s love life. 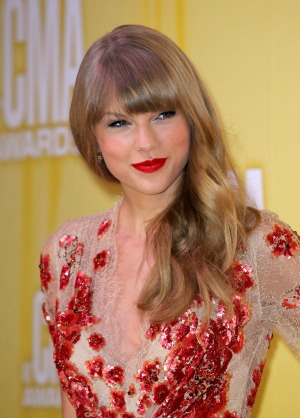 It’s tough to date Taylor Swift these days because not only does she write songs about her relationships, but her love life became the go-to joke at last night’s Country Music Awards.

CMAs hosts Carrie Underwood and Brad Paisley had a bit of fun at Swift’s expense as the 22-year-old country singer gamely watched with a smile. The banter began with Underwood saying, “Brad and I were backstage talking about what a strange year this has been.”

Paisley then added, “Just look at sports, I can’t keep track of all these trades,” while the “Blown Away” singer pointed out that Tim Tebow was traded to the New York Jets.

Then the Swift joke came into full play as Paisley mentioned “the greatest trade of the year” within the Kennedy family. He said, “They somehow traded Arnold Schwarzenegger for Taylor Swift.”

Awkwardness ensued and the audience chuckled as Underwood whispered in her co-host’s ear to correct his dated Nashville gossip. Paisley exclaimed, “What? Why don’t I ever hear about these things? I’m the last one to know? Are they ever gonna get back together?”

And then, the obvious punchline:  “Never, ever, ever” quips were exchanged in rapid fire between the five-time CMAs hosts. Swift was only shown once on-camera at the beginning of the opening sequence, but she had a polite smile on her face the whole time.

And yes, she did go solo to the awards since every boy in Nashville and Hollywood probably feared their relationship would turn into a song after just one date.

Swift performed later in the broadcast singing “Begin Again,” which is the latest single from her monstrous hit album, Red.