Eric Church’s hard work has paid off. The North Carolina native won big at the 46th Annual CMA Awards. He beat stiff competition to snag Album of the Year for his 2011 release, Chief. 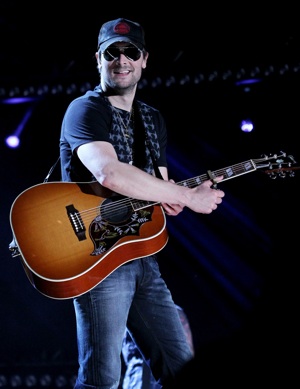 Church has struggled for years, but the win tonight solidified his place in the world of country music.

Church told the audience, “I spent a lot of my career wondering where I fit in — too country, too rock. I want to thank you guys for giving me somewhere to hang my hat tonight.”

Considering the competition, Church didn’t think he’d win anything . He was up against Miranda Lambert‘s Four The Record, Dierks Bentley’s Home, Lady Antebellum’s Own the Night and Luke Bryan’s tailgates & tanlines.

Church used his big moment to look back on his humble beginnings.

“I distinctly remember playing for eight people in Amarillo, Texas, four years ago,” Church said. “To go from there to here is quite surreal.”

Chief was released on July 26, 2011, and peaked at the top of the Billboard 200 and Billboard Top Country Albums charts. It includes the singles “Homeboy,” “Creepin,” and the number-one hits “Drink in My Hand” and “Springsteen.”

In June 2012, Chief shipped 1 million albums, making it a platinum-selling success in the U.S. What better way to top off a great year than with some CMA Awards love?