Earlier today, SheKnows was on the red carpet at the CMA Awards. We had the pleasure of speaking with newcomer Brantley Gilbert, who dished on his budding relationship with Jana Kramer. 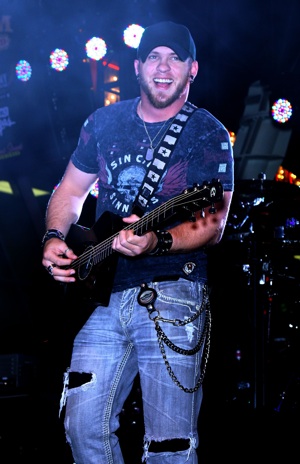 SheKnows was on hand at the CMA Awards to break some serious couple news. For a while, singers Brantley Gilbert and Jana Kramer have been spotted together, fueling dating rumors.

SheKnows saddles up to stream live from the CMAs! >>

Today, we got to the bottom of it all. We got the inside scoop on their romance.

SheKnows asked Gilbert if he and Kramer were an item, and he confessed, “Yes.”

He also confirmed that they spent New York Fashion Week together.

“I had to go to New York because I was getting the top half of my [tattoo] sleeve done for the show New York Ink. It just so happened to be the same week as Fashion Week. But it worked out good. I got to hang out with her. [We] went to a couple parties.”

If Gilbert doesn’t seem like the couture type, it’s because he’s not.

He admits, “I was a little bit out of my skin… I’m in there with holey jeans and a wife beater on the eighth floor of Saks [Fifth] Avenue, looking at women’s shoes.”

Kramer didn’t get into detail about the relationship, but she did call her boyfriend “the best guy I know.”

She kept comments about their love life low key but was completely open about her amazing gown. It was from designer Anthony Franco, and she thanked her publicist for getting it for her.

As for Gilbert, he’ll spend the rest of the night duking it out with his country peers. The singer is up for one of the biggest CMA Awards — New Artist of the Year.