Lucy Hale is adding “Singer” to her entertainment resume. The Pretty Little Liars star told SheKnows all about what to expect from her debut album. 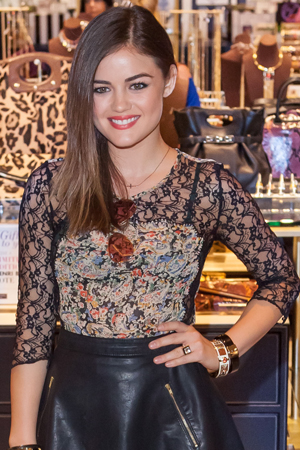 Actress Lucy Hale has a lot on her plate. She’s got a full-time gig on the hit ABC Family show Pretty Little Liars — and a new music career, too? Yep, the Tennessee native is about to release her debut country album on Hollywood Records, thanks to Sugarland’s Kristian Bush.

Clay Walker goes gaga over his wife on the red carpet >>

“He’s been very supportive,” Hale told SheKnows of Bush’s influence. “He said, ‘Are you sure you want to do this? I’ll fly you down to Atlanta, we’ll write a little and see how it goes.'”

The rest, as they say, is history. She told MTV News earlier this year that music was really her first love.

Thompson Square on first kiss: ‘She did the lean in’ >>

“Some people know, some people don’t know. I grew up performing, I grew up singing, and I never knew which route I was going to take,” said Hale, who first showcased her singing skills on the talent competition American Juniors in 2003. “Acting took off for a while, and I booked [Pretty Little Liars], and I did a movie last year, A Cinderella Story: Once Upon a Song, and I played a singer, and so that’s sort of how Hollywood [Records heard of me].”

The 22-year-old actress didn’t say too much about the album’s style — she has to keep some things a secret. She did tell us that she hopes it sounds “genuine.”

“I hope people latch onto it and believe the words that are coming out of my mouth,” she added.

Bush has also been a great influence on her own style and progression as an artist, Hale said.

How to succeed in country music according to Easton Corbin >>

“He’s been wonderful,” she said. “He’s a great mentor and a great friend.”