Jon Stewart and Stephen Colbert are on Jimmy Kimmel Live tonight! Who’s ready for an all out bro-fight? 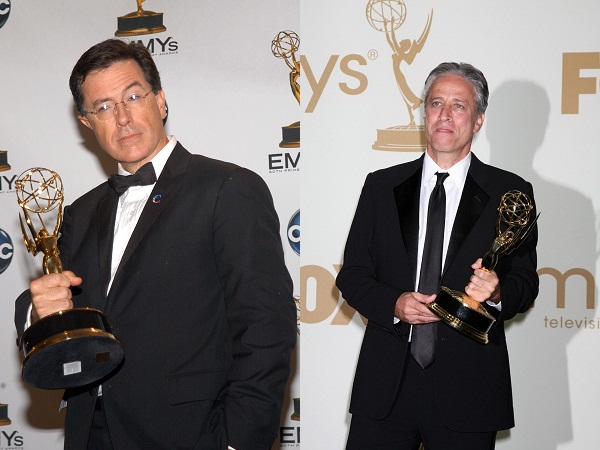 Since you certainly won’t be watching anything other than the CMA Awards tonight during prime time, you might be ready for a changeup come late night. If you want angry (but hysterical) political humor followed by some punk-grass tunes, look no further than Jimmy Kimmel Live.

Tonight, host Jimmy Kimmel scored himself an awesomely funny lineup of guests with Jon Stewart and Stephen Colbert. Think of it as watching Romney and Obama on the stage after the election, when there’s no reason to try to best each other but there’s still a hint of animosity. While it’s certain that Colbert and Stewart are buddies, the two Comedy Central hosts represent opposing views when they’re doing their mock news shows. Colbert plays the part of the ultra-conservative, America-loving guy, and Stewart is, well, not that. If Colbert stays in his Colbert Report character and Stewart acts even half as annoyed with politics as he does on The Daily Show, we’re in for a treat.

Leave it to Jimmy to score them both… and so close to the election, too!

After the boys are done duking it out, make sure not to skip the musical guests.

The Avett Brothers are tearin’ it up right now. The boys just released their new album, The Carpenter, and it’s being hailed as one of their best yet. If the name sounds familiar, you’ve probably seen them in one of two places. When they released their last studio album, I and Love and You, it was on every Starbucks counter in America. Then, last year at the Grammys, the brothers performed with Bob Dylan and British imports Mumford & Sons. Tonight, the guys will perform with the Brooklyn Philharmonic Orchestra. Check out “Live and Die” below for a taste of what’s in store!