The “Cowboys and Angels” singer chatted with SheKnows on the 2012 CMA Awards red carpet. Among his revelations? He picked up a guitar to attract the ladies. 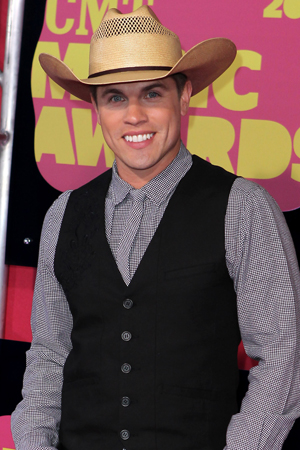 “Cowboys and Angels” singer Dustin Lynch is riding high these days — and one of the highlights has to be walking the red carpet at the 2012 CMA Awards. The 27-year-old is a whiz on the guitar, but it turns out he learned the instrument for more than just the love of music.

“My crutch is my guitar,” he joked to SheKnows of using his six-string to pick up the ladies.

All kidding aside, Lynch has quite a history with women — specifically, dancing women. He told us that playing at a restaurant/strip club was definitely one of his weirdest performances. His parents weren’t thrilled, either.

“They pulled the plug on that after about the second performance,” he joked.

Lynch’s career is anything but a joke, though. The singer and songwriter said he was inspired to write his debut single after learning of his grandparents’ relationship.

Which musicians are going stag to the CMAs? >>

“It’s about their love story. They were high school sweethearts,” he said. “It’s so neat to stand on stage and sing from a personal spot, and now people are singing it back to me.”

We’re totally in love with his laid-back, humble attitude. We’re expecting to see a lot more of him in the upcoming year — and maybe he’ll even get a CMA nomination in 2013?