Check out Miley Cyrus as Nicki Minaj! The engaged young star dressed as the bootylicious rapper for Halloween 2012. Although the outfit was outrageous, is it as crazy as Ms. Miley getting covered in cake — and kissing a unicorn-headed Liam Hemsworth? There’s a whole lot to see in the “Decisions” video, that’s for sure. 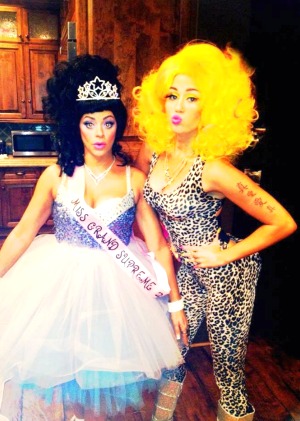 She may be Miley Cyrus by day, but it’s “Nicki Minaj” on Halloween night, thank you very much!

Revealing her celebrity costume for 2012, Miley Cyrus tweeted this image of herself and Mandy Jiroux Wednesday, writing, “@NICKIMINAJ you a stupppppiddddd hoe #stupittttstupitttt.”

While Miley Cyrus was in good company with many other celebrity Halloween revelers, the morning light brought about another work day for the 19-year-old actress and singer.

The “Decisions” video, featuring Miley Cyrus and EDM producer Borgore, debuted Thursday. Watch below as the songstress, fiancé Liam Hemsworth, adult-film star Jessie Andrews, and Borgore have their cake and fight with it, too!

Be sure not to miss the bit where Miley Cyrus makes out with unicorn-head wearing Liam Hemsworth, giving all a glimpse at some serious tongue-action!

Miley Cyrus talks about proposal, Liam gets a matching tattoo >>

Giving insight into the former Disney star’s coming of age that’s playing out before our eyes, Jessie Andrews told MTV News, “I understand where she’s coming from, trying to break away from that. She doesn’t want to be Hannah Montana anymore; she wants to be her own person. … The way she’s dressing, the hair, the music — everything is outside of the box. It didn’t really surprise me.”

Are you a fan of the “Decisions” video? What do you think of Miley Cyrus’ Nicki Minaj look?