With the bewitching hour behind us, we finally get to see what Halloween costumes celebs decided to don this year. But when does dress-up go from entertaining to plain insulting? Jessica Simpson rocked satirical style while other stars missed the mark. 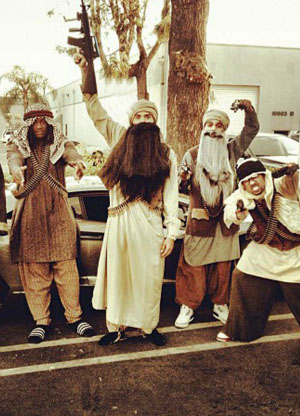 So Chris Brown and his merry band of thugs thought it clever to dress as Osama bin Laden and the Taliban for Halloween, posting this picture to Twitter with the caption “Ain’t nobody f*****g wit my clique!!!!” Methinks Mr. Brown may have missed the memo as to what constitutes funny and what is just in poor taste. Domestic violence? Not OK! Pretending to be proud members of a terrorist organization currently waging a jihad against America? Weird… also inappropriate. Maybe next year he should go as a douchebag — he won’t even have to dress up for that one. 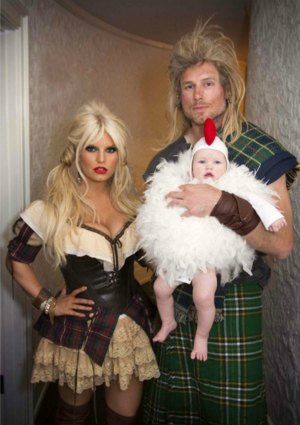 Taking advantage of a family photo opp moment, Jessica Simpson and Eric Johnson grabbed baby Maxwell and struck a pose while the little family was decked out in their Halloween garb — which looked like it was plucked right out of a scene in Braveheart. Jess, the sexy Scottish wench, and Eric, the William-Wallace-esque warrior, cradled cute Maxi… the poultry. Sure, it’s slightly unnerving that the couple chose to disguise their offspring as dinner fare, but that doesn’t mean it isn’t funny. The quasi-cannibalistic humor gains these guys’ major comedic points in our book. 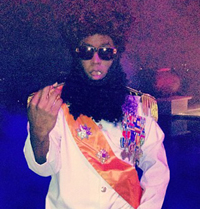 Apparently terrorism humor is hot this year in celebrity circles. Sean Combs, aka P. Diddy, decided to join in on the joke by donning what appears to be a Sacha Baron Cohen get-up a la The Dictator. His caption — albeit lacking any major spelling or grammar issues — is about as charming as Brown’s: “Happy Halloween b****es! Suck my dictator.” Perhaps he is the puppet master to Chris Brown’s Taliban crew. Or perhaps he and Chris are in cahoots on some twisted version of Making the Band (that show wasn’t too far from an act of terrorism, anyway). Either way, we much prefer Diddy dressed up in his other costume — iconic pop star Prince.

Hollywood Halloween Round 1: Attack of the cliché costumes >>

On a special episode of her show, Ellen debuted her Halloween costume to the world… and to her buddy/guest star Sofia Vergara, who just so happened to be the inspiration behind the voluptuous look. In a padded sequin dress giving her ample curves (including a “cheeky” rear view), Ellen could have easily offended sexy Sofia. Fortunately, Sofia — like us — found the outrageous ensemble to be hilarious. Besides, once people start making fun of your a** in this industry, you’ve pretty much made it. So, congrats, Sofia… you may now look forward to being the butt of many more jokes to come.