Chris Brown and his crew dressed as the Taliban to attend Rihanna’s Halloween party last night… You know, that violent terrorist group that hates women. 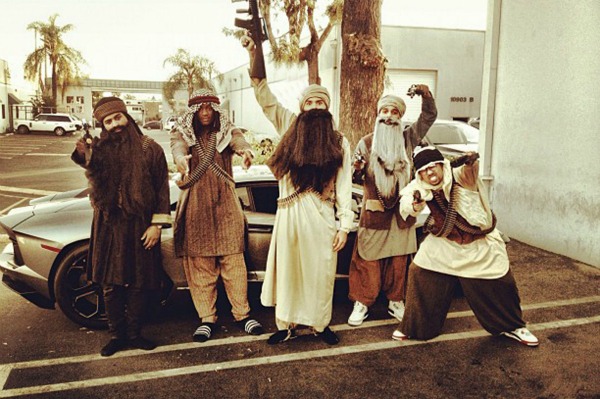 Chris Brown makes all the wrong moves all the time, yet his career never seems to suffer. After beating Rihanna senseless nearly four years ago, he is back at the top of his game — and back in the pop singer’s arms. He got a tattoo of a bloody, beaten woman on his neck. He’s been caught throwing around gay slurs several times. Now his latest misstep offends on multiple levels, yet he’s sure to get away with it again.

Brown and his crew attended Rihanna’s Halloween bash, and he posted a pic on Instagram of their group costume: The Taliban. Yup, the incredibly violent terrorist group that saves a special brand of torture just for women.

“Ain’t nobody F***ing wit my clique!!!!#ohb” Brown wrote on Twitter when sharing the photo.

The costumes consisted of what would traditionally be considered Arab garb, with automatic weapons and ammo draped over their shoulders, perpetuating every Muslim stereotype.

Twitter erupted in an uproar over the fact that Brown was wearing such a violent costume to the party of a woman he was convicted of beating bloody, but Rihanna didn’t seem to mind. In fact, while not addressing it directly on Twitter, she posted a page from a self-help book that read in part, “…most people who judge others who are actually doing something are the ones who are doing nothing themselves. They put down others trying to lift up themselves.”

Beyond the Rihanna beating incident tie-in to the costume, Muslim and Arab Twitter users are incensed that it perpetuates a terrible stereotype about their culture: That they are all terrorists. What would the public reaction have been if Justin Timberlake stepped out in blackface?

But Brown’s mom says we all need to settle down.

“HALLOWEEN IS FOR FUN NOTHING MORE THAN JUST FUN,” Joyce Hawkins tweeted. “GET A LIFE PLEASE.”