The rapper has been talking about working on a new album for a while, but with the release of a new hat in his online store, he officially confirmed it. 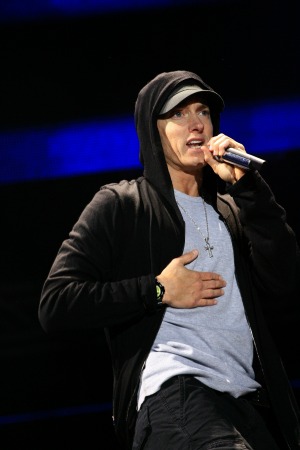 It has been two years since Eminem released his last album, and it looks like he may release another one next year. Talk of a new album has been around for a while, but the rapper finally announced it… sort of.

His web store’s description of the hat says, “Side panel is dedicated to the landmark Eminem solo albums. A portion of the proceeds will go to the Marshall Mathers Foundation.”

The addition of the year 2013 to the list is the announcement his fans have been waiting for. It means he will indeed be releasing the long-awaited album sometime next year.

“The 1996 inscription commemorates the release of indie debut Infinite, while 2010 marks the drop of Marshall’s last LP, Recovery, but fanatics with a keen eye noticed the 2013 entry that points to a new album for next year,” said MTV.

Eminem did confirm to MTV in August that he was working on a new album, but it didn’t sound like much of a priority at the time.

“I’ve actually kinda just started,” he said. “I’ve been on the move a little bit too, so I’ve in between things, sneak[ed] songs in here and there.”

As always, the rapper is busy with a lot of different projects. Last weekend, he helped out friend 50 Cent to shoot a video in Eminem’s hometown of Detroit, said MTV. He also recently wrapped up work on Slaughterhouse’s new album, as well as announcing himself as the executive producer of Skylar Grey’s new album.