A Lance Armstrong effigy is ready to burn! The cyclist is set to go down in flames on Guy Fawkes Night, much like his cycling career and endorsement deals have done in recent weeks. 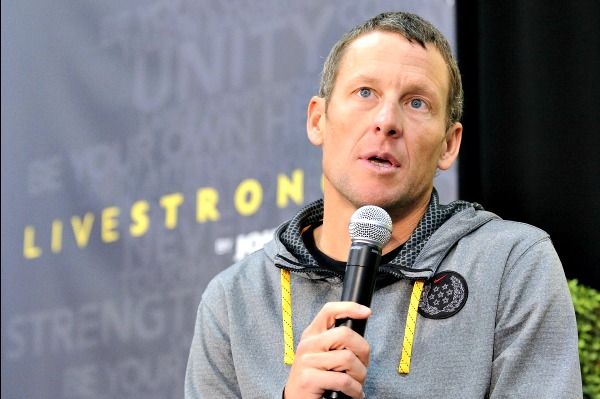 A Lance Armstrong effigy has been erected for the sole purpose of being lit on fire. Revelers in England take both their sports and their partying seriously, and they therefore have thrown the fallen cyclist into the mix of Guy Fawkes celebrations.

Come Nov. 5, the Lance Armstrong effigy will be lit up by the famous Edenbridge Bonfire Society. The 30-foot model is complete with a cycling helmet and a sign that reads, “For sale, racing bike, no longer required.”

Traditionally, towns across Britain light bonfires and set off fireworks on Nov. 5 to commemorate Guy Fawkes’ failed 1605 plot to blow up Parliament. In recent years, effigies of Fawkes himself have been replaced with controversial stars from the sporting world and beyond.

Other celebrities who have received the dubious honor include Russell Brand, soccer star Wayne Rooney, Katie Price and Saddam Hussein. Each new dishonoree has been dubbed “Celebrity ‘Guy'” of his or her respective year.

Explaining why the cyclist was chosen for Guy Fawkes Night 2012, an Edenbridge Bonfire Society spokesperson commented, “Lance Armstrong is certainly the biggest villain in sport, with fans across the globe feeling cheated by a man who was thought to be whiter than white.”

That’ll be white-hot soon, no doubt!

This year, Lance Armstrong beat out a long list of contenders, which at one point included the host of the long-running show Jim’ll Fix It.

“We had a short list which included Jimmy Savile, but it was decided it would not be nice to use him, as a lot of children attend the bonfire, and they might start asking their parents questions,” the society’s coordinator revealed. “Then we had [British Conservative politician] George Osborne, but he hasn’t really got a face that everyone knows, and he’s just a chap in a suit. We felt he would be a bit boring. We started to do [radical cleric] Abu Hamza, but then we decided we weren’t entirely happy to do him, so Lance Armstrong came out of the woodwork.”

Do you applaud or disapprove the burning of a Lance Armsrtong effigy?