Word of Kate Moss’ breakdown comes straight from the model herself, who was an open book during her latest Vanity Fair interview. From breaking into the biz, to breakdowns and breakups, this model and mom has been through it all. 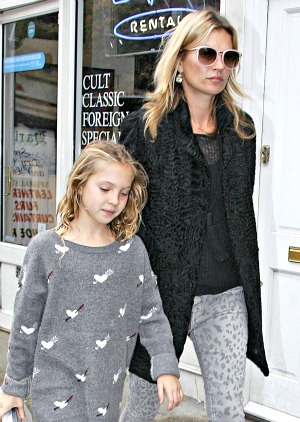 Kate Moss’ breakdown in her teen years is one of many subjects the model didn’t shy away from delving into in the latest issue of Vanity Fair. Though the 38-year-old is now a married woman and mother, the road to such happiness through the modeling world was incredibly rough.

After being scouted at age 14 while walking through the airport, Kate Moss soon faced casting calls she was ill-prepared for.

Recalling one encounter, she told Vanity Fair, “I see a 16-year-old now, and to ask her to take her clothes off would feel really weird. But they were like, ‘If you don’t do it, then we’re not going to book you again’. So I’d lock myself in the toilet and cry and then come out and do it.”

While the world couldn’t get enough of Kate Moss and hunky Mark Wahlberg (a.k.a. Marky Mark) in Calvin Klein’s sexy ads, shooting with the Good Vibrations singer proved to be too much for the fragile teen.

“I had a nervous breakdown when I was 17 or 18, when I had to go and work with Marky Mark and Herb Ritts,” Kate Moss said. “It didn’t feel like me at all. I felt really bad straddling this buff guy. I didn’t like it.”

Describing her breakdown further, Kate Moss continued, “I couldn’t get out of bed for two weeks. I thought I was going to die. I went to the doctor and he said, ‘I’ll give you some Valium,’ and Francesca Sorrenti [Moss’s friend and mother of Mario Sorrenti], thank God, said, ‘You’re not taking that’.

“It was just anxiety. Nobody takes care of you mentally. There’s a massive pressure to do what you have to do.

“I was really little, and I was going to work with Steven Meisel. It was just really weird — a stretch limo coming to pick you up from work. I didn’t like it. But it was work and I had to do it.”

From 1994 to 1998, Kate Moss found comfort in the arms of boyfriend Johnny Depp. “There’s nobody that’s ever really been able to take care of me. Johnny did for a bit. I believed what he said. Like if I said, ‘What do I do?’ — he’d tell me. And that’s what I missed when I left. I really lost that gauge of somebody I could trust.

“Nightmare,” she said, summing up her heartbreak at the end of their relationship in one word. “Years and years of crying. Oh, the tears…”

“I don’t really go to clubs any more,” the model commented of her current, quiet life. “I’m actually quite settled. Living in Highgate with my dog and my husband and daughter. I’m not a hell-raiser.”

Are you surprised to hear of Kate Moss’ breakdown over the Marky Mark photoshoot?