Even vampires like to celebrate Halloween! It’s an added bonus when they get to crash a costume party full of drunken frat boys. Nothing tastes quite as good as a blood-and-Natty Lite cocktail. 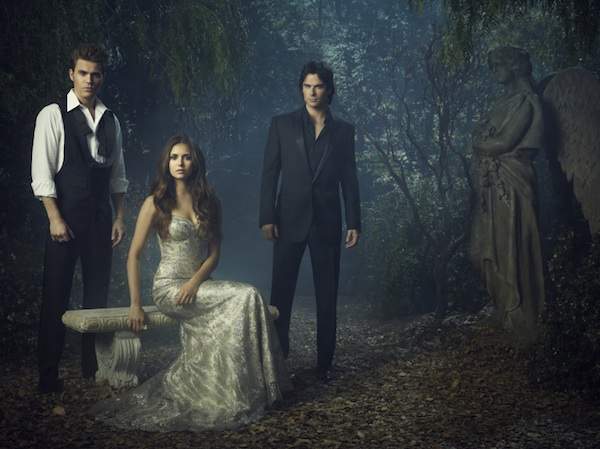 This whole “feeding” thing is still incredibly new for Elena (Nina Dobrev). There’s a thin line between enjoying a snack and killing an innocent human, and it’s one she’s still learning to walk. Damon (Ian Somerhalder) has an idea for a great learning opportunity, though.

Elena and Bonnie are heading to Whitmore College for the day. A new professor is taking over the Occult Studies classes that Bonnie’s grandmother once taught, and Bonnie wants to do a little scoping. Plus, before Elena was turned into a vampire, college was certainly in her future. Damon decides to go with them, knowing from his own personal experiences that college campuses are a great place to feed.

When he admits what his favorite part about college is, neither of the girls is surprised.

After spending the afternoon wandering campus and checking out the new Occult Studies teacher, Professor Shane, the Mystic Falls kids find themselves in front of a frat party. Damon is determined that this is the absolute best place for Elena to hunt for blood. Everyone is drunk, the place is crowded, and since it’s Halloween, a little bit of blood will just fit into the decor.

Meanwhile, back in Mystic Falls, Stefan (Paul Wesley) is left to follow a lead Damon gave him. It turns out Conner’s body wasn’t found at the site of the explosion. A human couldn’t have survived that explosion, meaning Conner is definitely supernatural and is still on the loose. They’ve hijacked a few things from Conner’s RV, and Damon leaves Stefan to search out more information.

What will happen when Elena sinks her teeth into her first tasty frat boy? Will she be able to unlatch before she drains the life from him, or will she only stop after it’s too late? In the post-feeding high and swept up in the fake fog and dimmed lights, what will happen between her and Damon? Will Stefan uncover the truth about “the five” while his friends are out having fun?

There’s only one way to find out.

For more on The Vampire Diaries, check these out: