How many of you knew this blonde bombshell hailed from Kosovo? Don’t let that British accent mislead you, this artist loves her roots. 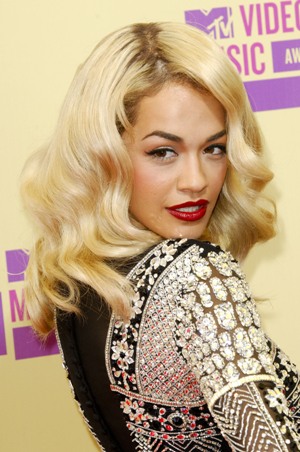 Is that you, Rihanna?

The video early on pans to a striking blonde on a rooftop. She was wearing an unzipped jacket that barely conceals a black bra and her midriff. A flag scarf was worn around her nose and mouth, showcasing her smoldering eyes.

If I didn’t know the title of the song, or who Rita Ora was, this could pass as Rihanna. The scenes from Kosovo also reminded me of the glimpses of culture Rihanna gave in the “Man Down” music video.

Maybe their baseline associations — on a superficial level — would throw someone off. I knew Rihanna had the Barbados/feisty/tattooed speculated boyfriend (Chris Brown), but then in strolls Rita with her Kosovo-British/spunky/tattooed speculated boyfriend (Rob Kardashian). And seriously, both of them have mass sex appeal, energetic music styles, seemingly loud personalities, striking features, vivid urban fashion senses, have some musical affiliation to Jay-Z, so some confusion is possible.

If she wanted a Shape magazine cover, she may get one now

If abs could talk, hers would be best friends with the likes of Gwen Stefani‘s. Yes, her stomach is that chiseled, that flat, and that mesmerizing. I haven’t seen a music video this jealousy-inducing since Jennifer Lopez‘s “Love Don’t Cost a Thing” or Katy Perry‘s “California Girls.”

I wish I was joking, but I plan on renewing my gym membership now!

She has had a couple of songs we have all heard and loved, like her fun “How We Do (Party)” and her vengeful and empowering “R.I.P.” But, I don’t think I have seen a video quite like this one where she simultaneously possesses raw sex appeal and a spirited childlike beauty. You’ll fall in love with her watching her pride for her culture and hometown running amongst the children, riding through the city, and soaking in the skyline — and fall in lust for her sultry dance moves, thigh-high boots, crimson lips, and ridiculous bod. Throw in some acrobatics and lively participation from her city and you have a heck of an entertaining video.

Rather than “Good Girl Gone Bad,” she’s a good girl that can be bad? Considered me charmed by this addictive tune and beautiful artist. Watch!