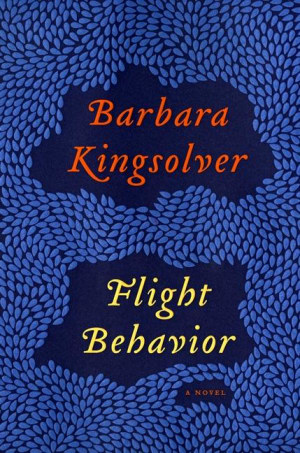 As a writer with degrees in biology, Barbara Kingsolver writes books richly inhabited by the natural world. This is true in her books from The Poisonwood Bible, which takes place in the Congo — perhaps her best known novel and a darling of book clubs — to Animal, Vegetable, Miracle, her memoir about her family’s attempts at a locovore lifestyle.

But Flight Behavior is perhaps Kingsolver’s book most firmly placed in the natural world. Set in Appalachia, where Kingsolver herself lives, Flight Behavior examines not only her protagonist’s personal growth, but also the rural-urban divide in America and the realities of climate change. Flight Behavior is a thoughtful and multifaceted book, and that is why it is our Red Hot Book of the Week.

Dellarobia never meant to live this life. She always had big dreams as a young girl, although she had no specific plans to go with those dreams. Then she got married at age 17 because Cubby Turnbow got her pregnant — and stayed married, even though she lost the baby. Despite the two beloved children that came along later, Dellarobia just isn’t happy in this life, and she’s just about to go ahead and leave it, heading up the mountain on the Turnbow land for a tryst with a handsome young man.

On her way up the mountain, Dellarobia sees something that makes it look as if the entire forest is on fire. There is no smoke, but the trees are bathed in orange, shimmering in the sun. Suddenly, Dellarobia is reconsidering running from her life. When it turns out that the fire she saw on the mountain is a huge flock of Monarch butterflies, Dellarobia’s life changes completely.

Being the one to discover this Monarch phenomenon makes Dellarobia famous, at least temporarily. She is interviewed on TV, and even becomes an internet meme. The most transformative things that happen, though, are the change in her relationship with her mother-in-law, and her introduction to ecologist and biologist Dr. Ovid Byron. Before long, Dellarobia has gained a renewed sense of purpose, as well as finding the self-regard that has been missing for about a decade.