Donald Trump may be pompous enough to believe he can bring down Obama’s election campaign with a $5 million offer, but he’s also aware the nation is in a state of crisis thanks to Hurricane Sandy. On Tuesday, attempting to be reasonable, the Trumpster sent out a tweet updating his Obama offer terms. 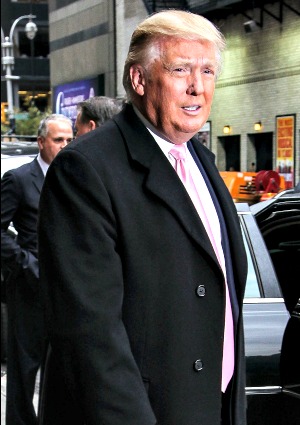 Donald Trump‘s Obama offer remains on the table due to Hurricane Sandy’s destruction. Recognizing the man in the Oval Office might be a tad too busy right now to dig up those college records, the business magnate has offered a deadline extension.

Tweeting to his 1.7 million followers, Donald Trump wrote Tuesday, “Because of the hurricane, I am extending my 5 million dollar offer for President Obama’s favorite charity until 12PM on Thursday.”

Despite the fact that the president seems completely uninterested in the offer, Donald Trump hasn’t given up hope.

“I think there’s a chance,” the 66-year-old told The Daily Caller last week. “A lot of people think he won’t because he’s got something to hide. I would love him to, because I think if he did it, it would show everything is fine.”

“Not one Trump building, even those along the Hudson River, lost power,” the host of The Apprentice series went on to tweet. “Testament to quality systems and construction.”

The show, however, has been affected by Hurricane Sandy, though production is coping with the changes.

“Fans shouldn’t worry,” assured Trump. “We have adjusted the filming schedule of the upcoming 13th season of @CelebApprentice appropriately due to the storm.”

Not one to let politics be forgotten for long, Trump added, “Let’s be honest, if Obama thought he could get away with campaigning during the storm, then he would have been in Ohio on Monday.”

Do you think Barack Obama should take up Donald Trump on his offer?