Step on up, Robert Pattinson. You’re the next face of Dior’s fragrances for men! Here’s hoping you can pull off scent more seriously than Brad Pitt, subject of endless mockery for his wacko Chanel commercial. 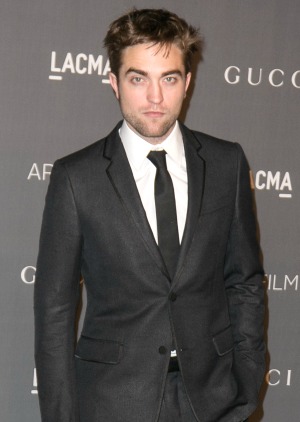 Robert Pattinson’s Dior deal is officially done! Whether you love him as baseball cap–wearing RPatz or sparkly vamp Edward or pine to heal his broken heart, you’ll soon associate this 26-year-old with scent.

E! Online reports Robert Pattinson will soon be featured in a series of ad campaigns for the Christian Dior line of men’s fragrances.

“Rob likes the brand,” an unnamed source commented on the match between the acting hunk and the French fashion house.

Betting a pretty penny throngs of men will want to smell like Pattinson, Dior has reportedly plunked down $12 million to seal the three-year deal — notably more than Brad Pitt snagged by agreeing to be the famous face of Chanel No. 5.

Papa Pitt is said to be earning $7 million for the Chanel campaign, which set out to share “the perspective of a man on the most feminine fragrance of all time.” Unfortunately, it’s not going so well.

“The world turns and we turn with it,” Brad Pitt rambles in the black and white commercial, “but wherever I go, there you are.”

“It’s like older, sadder, tired Tyler Durden,” reads one well-liked comment on the YouTube version of the commercial, which refers to Brad Pitt’s 1999 Fight Club role.

Another, left by one of the over 5 million people who’ve already viewed the 30 seconds of rambling below, reads, “This feels like someone plugged a French script into google translate and was like, ‘Yeah, this is deep man. Let’s go with this!'”

How do you think Robert Pattinson and Dior will compare to Brad Pitt’s Chanel commercial?