She is the butt of many music jokes and hated by millions of die-hard Beatles fans, but it turns out Yoko Ono has gotten a raw deal all these years, according to Paul McCartney. 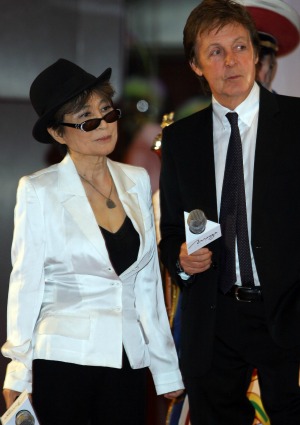 She is the most hated woman of a generation. Yoko Ono has long been accused of breaking up the Beatles — one of the greatest bands in rock history.

But that is not how it happened, as it turns out.

Paul McCartney says Yoko Ono did not break up the Beatles. In fact, all those years ago, there was much more strife going on in the band than anyone outside knew, and Ono was merely a scapegoat.

In an interview with David Frost (the subject of the political thriller Frost/Nixon), McCartney cleared Ono’s name.

“She certainly didn’t break the group up; the group was breaking up,” McCartney said.

Speaking of John Lennon‘s gorgeous body of post-Beatles work — including his classic hit “Imagine” — McCartney explained, “I don’t think he would have done that without Yoko, so I don’t think you can blame her for anything. When Yoko came along, part of her attraction was her avant garde side, her view of things, so she showed him another way to be, which was very attractive to him. So it was time for John to leave; he was definitely going to leave [one way or another].”

McCartney does admit that Lennon’s insistence that Ono sit in on recording sessions and even contribute caused some discord, but he said the arguments over who would be the Beatles‘ manager after Brian Epstein died were what finally did the group in. McCartney wanted it to be his first wife’s brother, while the other three were pushing for businessman Allen Klein.

“I was fighting against the other three guys, who’d been my lifelong soul buddies,” McCartney explained. “I said I wanted to fight Klein.”