Avril Lavigne finds herself in some sort of warped love triangle, with her new fiance yelling (over Twitter) at her ex-husband. 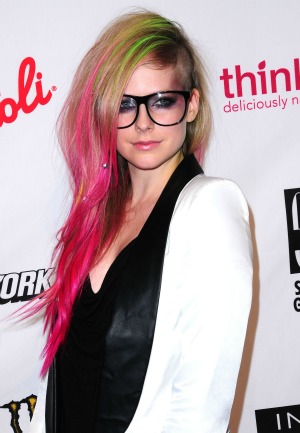 Everyone has been through a bad breakup, but you’ve never experienced what Avril Lavigne is going through right now. The singer recently announced her engagement to fellow Canadian rocker, and Nickelback front man, Chad Kroeger.

But this won’t be Lavigne’s first marriage. In 2009, she split with her husband of three years, Sum 41 front man Deryck Whibley. And it looks like Whibley is not quite over the split. For Halloween, he decided to dress up as Lavigne. But that wasn’t all — Whibley’s current girlfriend, Ari Cooper, dressed up as Kroeger.

But Kroeger didn’t think it was funny at all. And like many other celebrities in this day and age, he decided to share his frustrations over Twitter.

“Hey Deryck loved the costumes!” Kroeger tweeted on Sunday. “We were going to dress up as you guys this year but all the parties had celebrity themes haha!”

Lavigne has always said that she split from her ex- on good terms, but the Halloween feud suggests that may not have been the case.

“He’s one of my best friends, and we work really well together, and we stay in touch,” she told Ryan Seacrest in 2011, according to The New York Daily News. “I think we’re very lucky. We’ve been friends for a really long time, and we always will be family. We have a connection. Things are good. I’m really grateful for that.”

Lavigne and Kroeger announced their engagement in August, to the surprise of almost everyone. They had kept their relationship quiet for a while.

Kroeger quickly sent another tweet to Whibley, making it seem like he may actually have been joking — or that he just wants to show his brawn to his future wife’s ex-husband.

“You owe us a couples bowling grudge match see you when I get back from Russia!” he tweeted.