Despite a serious claim of domestic abuse by estranged wife Evelyn Lozada, Ochocinco will be able to put his domestic violence situation behind him within the next few months. 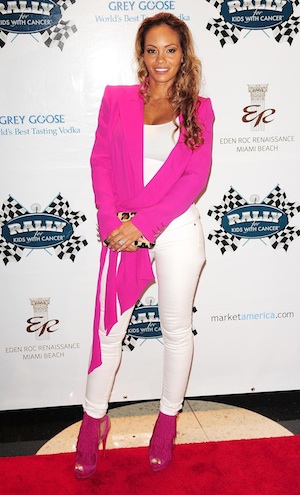 Evelyn Lozada will not renew her restraining order against estranged husband Chad “Ochocinco” Johnson. Lozada was issued a restraining order against Johnson after he allegedly hit her in the face with his own head during a heated argument in his car. The pair were said to be fighting over Johnson’s alleged infidelity, a claim propelled by Lozada in the press but not confirmed by Johnson.

Lozada reportedly told friends she will not renew the protective order against Johnson because she simply wants to “move on.” TMZ reports Chad is “on track to finish his batterer’s intervention program in the next couple months — at which point Chad will ask the judge to terminate his probation and lift the no-contact order.” Lozada and Johnson do not have any children together but Lozada does have a daughter from a previous relationship.

In 2003, the Department of Justice (DOJ) reported that the effectiveness of batterer’s intervention programs are disputed, but they remain a legal tool to ensure accountability for the offense without jail time.

Chad Johnson pled no contest to the charge of domestic battery back in September 2012. The plea of “no contest” means Johnson neither admits nor denies the assault allegation. (In general, courts tend to treat “no contest” pleas as a “guilty” plea for sentencing guidelines, but “no contest” offers a level of protection for the defendant from future civil action).

Ochocinco and Lozada married in July 2012, but Chad filed for divorce in the weeks following his domestic violence charges. Lopez was issued an automatic restraining order against Ochocinco.