Jimmy Kimmel’s New York debut will have to wait one more day as Hurricane Sandy bears down on the East Coast and shuts down most NYC productions. 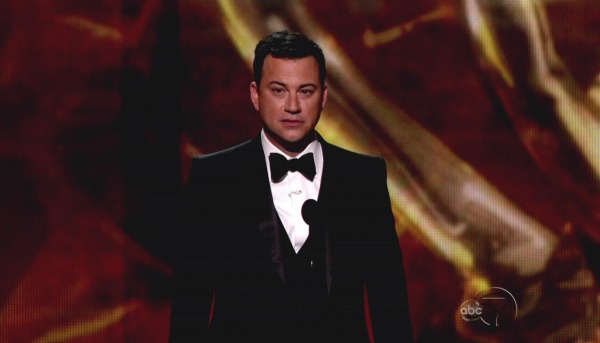 The excitement surrounding the Jimmy Kimmel Live! show in Brooklyn this week was dampened by Hurricane Sandy’s presence on the East Coast. The show was supposed to have its New York debut tonight at the Brooklyn Academy of Music with guests Kelly Ripa, Chris Rock and musical guest Alicia Keys.

Kimmel’s publicist released a statement saying, “Due to stupid Hurricane Sandy and in the interest of the safety of our studio audience, Jimmy Kimmel Live! will not broadcast tonight. We are hopeful to be back on the air tomorrow night with Howard Stern, Tracy Morgan and Sharon Jones and the Dap Kings.”

The late-night talk show host had been hoping to tape tonight despite the weather warnings. Representatives for the show were even touting their backup generators and having extra crew members on hand to assist with the challenges of shooting in the hurricane as late as Sunday night.

However, once it became evident that the studio audience would have difficulty making it to Brooklyn with all of the major bridges and transportation modes shut down, the production ended.

Currently, all Broadway shows are on temporary hiatus and the city has suspended any outdoor filming permits. As a result of the “Frankenstorm,” shows like 30 Rock, The Daily Show with Jon Stewart, Gossip Girl and Nurse Jackie have all shut down production while they ride out the inclement weather.

There are two late-night talk show hosts who are braving the weather: David Letterman and Jimmy Fallon. Both shows film in Manhattan, so it may be easier for tourists and NYC residents to get to the studios. That situation may change as the weather escalates, but as they say, “The show must go on.”