Say it isn’t so! Anderson Cooper is losing one of his jobs. The host’s syndicated talk show Anderson Live has been cancelled. It will wrap production at the end of this season. 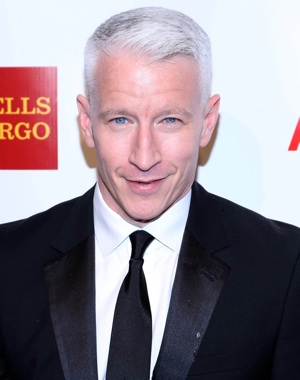 Anderson Cooper‘s talk show is a goner. We thought the Silver Fox could do no wrong, but his bosses disagree. This morning it was announced that Anderson Live is getting the boot.

Cooper is a popular journalist who’s made a name for himself working in hard news. Yet he couldn’t generate enough buzz to keep his latest venture afloat.

According to Deadline, various stations have been notified that the show will wrap after two seasons.

This year, the producers and host attempted to revamp the talk show’s format. They even made over the set, hoping it would give it a more welcoming vibe. Unfortunately, it wasn’t enough.

Cooper’s already released a statement regarding the decision:

“I am very proud of the work that our terrific staff has put into launching and sustaining our show for two seasons,” he said. “I am also grateful to Telepictures for giving me the opportunity, and indebted to viewers, who have responded so positively. I look forward to doing more great shows this season, and though I’m sorry we won’t be continuing, I have truly enjoyed it.”

Cooper obviously has other jobs to keep him busy. The most prominent being his CNN show, Anderson Cooper 360. But we feel sad for the crew members, who’ll have to find work elsewhere. We hear Queen Latifah‘s trying her hand at daytime (again). Maybe they can give her a call?

Production on Anderson Live will wrap in the spring.

Did you watch Anderson Live? Are you shocked by the cancellation?