As if Blake Shelton weren’t a heartthrob already, this song is a mesmerizing hybrid of sincere passion and warming honesty — all making him completely irresistible. 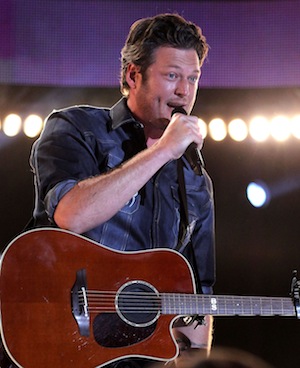 It doesn’t matter if you were the first to sing it, as long as you are the last, Mr. Shelton

Nominated for 2012’s Song of the Year and Single of the Year at the Country Music Awards, “God Gave Me You” originally was written by David Barnes. According to Taste of Country, this power ballad actually was the motivation behind Blake Shelton‘s building the courage to propose marriage to Miranda Lambert.

A man humbled by his love is a formula for the perfect love song — and who could say no to that dimple?

The honesty of country music matched with the smooth, warming twang of Shelton’s voice really sold me on this song. It begins with a tender guitar, strumming with typical, nostalgic candor, and then Blake starts singing with brutal honesty.

“I’ve been a walking heartache,
I’ve made a mess of me.”

As the song ventures onward, we hear his ruthless, unabashed pride in his woman’s love for him and his admirable acceptance of his numerous flaws. The relatability of the song could also extend to a child, a sibling, or anyone who could instill this sort of inspiration in someone. But, because of his very publicized marriage, it’s fair to assume this is an ode to his wife. Blake always gives his music a personal touch, and I definitely recommend his also-nominated “Over You,” co-written with and sung by his wife, Miranda Lambert.

He sounds certain that a divine force had to be responsible for finding such a wonderful match to his undeserving existence. Persevering at all costs, the love he describes truly sounds like a modern-day fairy tale. Not to mention, he displays his beautiful voice in all the right ways — pitch perfect.

If you weren’t charmed by him before, you very well may be now

It doesn’t really take much to convince me Blake means what he sings. He has a longing voice that sounds strangely strained — in a good way. It’s almost as though he is pleading for his song to get conveyed to the person it is about, and the rest of us are all watching from the sidelines. This song may apply to anyone, but he sings it with a personal fire — laden with gratitude.

Blake has that “It” factor, a certain superstar charm that is able to cross over into his music and even into his television presence on The Voice.

I’m not on The Voice, but I am Team Blake

Check out the chorus below, hear how much emotion is in his voice, and then tell me this song isn’t a winner. It will stand the test of time, and I certainly hope those voting for the awards share the sentiment, too. Ahh! The anticipation is killing me!