It was Zooey Deschanel’s turn to sing the national anthem in Game 3 of the World Series. How did she do? 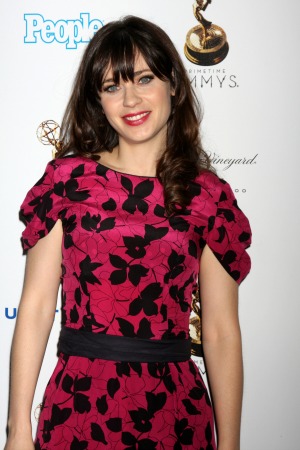 The FOX network is doing a great job of promoting its TV stars by having them sing the national anthem at this year’s World Series. Last night, it was Zooey Deschanel‘s turn to hit the stage in Game 3 of the series between the San Francisco Giants and the Detroit Tigers at Comerica Park in Motown.

Deschanel came dressed in a sparkly, nude dress, accessorized with a red belt and shoes to complete the look. The New Girl star was rock solid throughout the notoriously difficult song, and she displayed not one ounce of nerves during her two minutes in the spotlight.

The singer is no stranger to “The Star-Spangled Banner,” since she also sang it at last year’s World Series.

Deschanel also made it clear she was just happy to be there and didn’t want choose a favorite team in this year’s matchup. She tweeted before the game, “I am rooting for BOTH teams!!! Go #Tigers! Go #Giants! Can’t wait for the game!”

The FOX network has supported many of its television shows by having its on-screen talent sing the national anthem throughout the World Series. Phillip Phillips, the most recent winner of American Idol, kicked off Game 1, while Glee star Matthew Morrison opened Game 2.

If you are wondering who to watch for in Games 4 and 5, try The X Factor judge Demi Lovato for tonight’s game and the amazing diva Aretha Franklin for Game 5. That is, if Game 5 is even necessary, as Detroit has yet to win a game in the series.