Last night, at the annual Midori Halloween party, Kim Kardashian walked the green carpet while dressed like Daryl Hannah from the movie Splash. 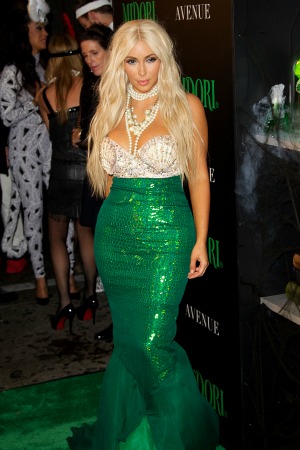 On Saturday, Kim Kardashian tweeted out to her fans, “Getting ready for my Midori Halloween party tonight!!! Any idea of what my costume will be???”

We didn’t have to wait long, as she and her rapper boyfriend, Kanye West, stepped out for the Midori party in New York City last night wearing matching outfits from the 1984 film Splash. Inspired by Daryl Hannah, Kim wore a full mermaid costume with a long, blonde wig, a seashell-bedazzled bra, and a shiny, green tail that hugged her famous curves. She told the press last night that the costume took two months to make and two hours to put on.

If you were expecting West to be costumed like Tom Hanks, think again. He decided to take his wardrobe in a more nautical direction, as he dressed like a stylish captain from a very expensive yacht. His costume included a blue-striped shirt topped with a sport coat, cuffed white pants, a captain’s hat, and red deck shoes to accessorize the look.

Kardashian is a spokesperson for the Midori brand of melon liqueur, and each year, she dons a green-inspired costume for the Halloween party thrown by the green beverage’s makers. Last year, she dressed as Poison Ivy from the Batman series. That occurred around the same time as her infamous split from Kris Humphries, after just 72 days of marriage.

Kanye did not talk to the press last night, but he was clearly there in a supportive capacity, taking iPhone photos of his reality-show girlfriend. His constant presence only fuels speculation that the duo are going to get engaged soon.

The only sticking point? Kardashian still hasn’t settled her divorce from Humphries.